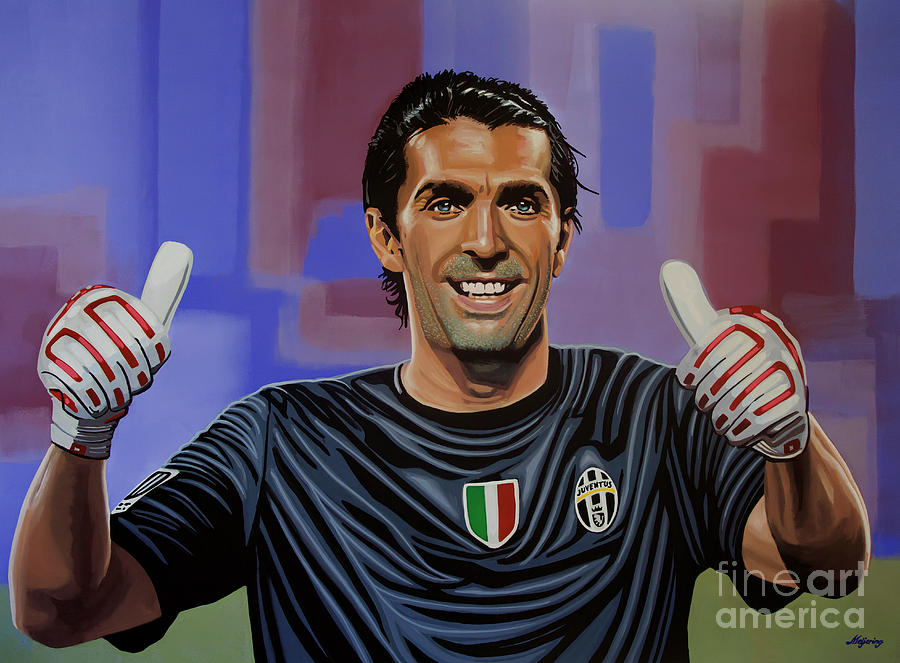 Gianluigi Buffon Painting is a painting by Paul Meijering which was uploaded on April 4th, 2017.

Realistic acrylic painting on panel of the Italian goalkeeper in soccer Gianluigi Buffon, painted by the Dutch fine artist Paul Meijering - the... more

Realistic acrylic painting on panel of the Italian goalkeeper in soccer Gianluigi Buffon, painted by the Dutch fine artist Paul Meijering - the Original painting is 90 x 120 cm and for sale

Gianluigi "Gigi" Buffon (born 28 January 1978) is an Italian professional footballer who plays as a goalkeeper. He captains both Serie A club Juventus and the Italy national team. Buffon is one of only eighteen players to have made at least 1,000 professional career appearances; with 168 international caps, Buffon is also the most capped player in the history of the Italian national team, the joint fifth-most capped male international footballer of all time, alongside Ivan Hurtado, and the most capped European international player ever. He is widely regarded by players, pundits and managers to be one of the greatest goalkeepers of all time, and, by some, to be the greatest ever. Buffon is known for his "outstanding shot-stopping" and for being "a vocal organizer of the defence and a key dressing room personality". He is currently the most expensive goalkeeper in history, following his €53 million transfer from Parma to Juventus in 2001. Buffon holds the record for the most clean sheets in Serie A, and with the Italy national team; he also holds the record for the longest streak without conceding a goal in Serie A history: over 12 league matches, he went unbeaten for 974 consecutive minutes during the 2015-16 season, as well as having achieved the most consecutive clean sheets (10) in Serie A in that same season.

Thank you so very much, John, for all your support, compliments, and the feature in your wonderful group!!;-))

Thank you so much, Sharon, for your lovely compliment!!;-))

This fabulous piece of art that has been featured on the Art District home page. Congrats for this awesome accomplishment! Please archive your work in the groups "Feature Archives & Thank You Thread"...Pamela

Thank you so much, Pamela, for all your support, compliments and the feature in your amazing group!!;-))

Thank you so much, David, for all your support and the feature in your creative group!!;-))

Thank you so much, Michael, for all your support and the feature in your presentive group!!;-))