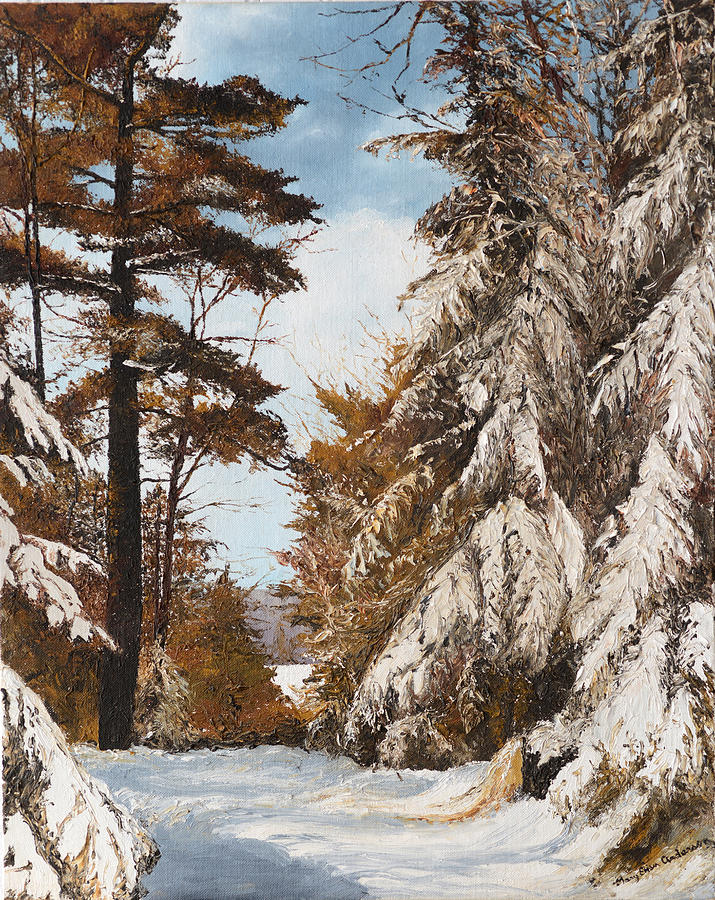 Holland Lake Lodge Road - Montana is a painting by Mary Ellen Anderson which was uploaded on February 12th, 2013.

Freshly fallen snow weights heavily on the branches of the Larch Pine trees that line the now impassible road. Light streams through trees, drawing geometrical patterns. It's so quiet you can hear the earth awakening to it's new blanket. It's a world and moment where you are unprotected by man's innovations; beautiful and worthy of respect.

Holland Lake Lodge is located near Missoula, Montana. It is an entrance into the Bob Marshall Wilderness, where my brother was an outfitter. "The Bob", as it is known by locals and nicknamed by the U.S. Forest Service employees, ranges in altitudes of 4,000 to over 9,000 feet (1,220 to 2750 m). A long escarpment known as the Chinese Wall averages 1,000 feet (300 m) high from its base and extends for 40 miles (64 km). Aside from numerous waterfalls, lakes, and dense forests, the wilderness is also prime Grizzly bear habitat and the U.S. Forest Service claims that the population density of this species is higher than can be found anywhere else in the U.S. outside of Alaska. The Bob is also home to many other large mammals such as moose, elk, black bear, mountain goat, bighorn sheep, wolverine, mountain lion, lynx, and wolf. Bald eagles, osprey, pelican, and trumpeter swan are just a few of the bird species found. The dense old growth forests are dominated by Douglas fir, larch, and spruce. Forest fires have changed large areas in the wilderness complex in recent years.

Wilderness areas do not allow motorized or mechanical equipment including bicycles or hang gliders. Camping and fishing are allowed; fishing requires a state license; no roads are present and there is also no logging or mining in compliance with the Wilderness Act. Some administrative cabins constructed in the early 1920s afford refuge for trail crews and wilderness rangers. Wilderness areas within National Forests and Bureau of Land Management areas also allow hunting in season.

-----------Artist-------------
Mary Ellen Anderson is a contemporary American oil painter residing in Lawrence, Kansas USA. She is known for her oil paintings that blend ultra-realism and impressionism into a unique style that is reminiscent of Renaissance masters. Common themes are mid-west and western landscapes, portraits, and nature.

Beautiful, I love this and the shadow work is outstanding!

Thank you, Jose for featuring this in the group "Realistic Paintings".

You are a fabulous painter Mary, trees were always the hardest thing for me to paint. Well Done!!

Thank you very much Anthony. Much appreciated.

This is absolute magic!!!

Awesome, Mary Ellen. Colors, composition, values, all is there making for a thrilling work. V/F

Thank you so much Hanne, I truly appreciate your support.

Thank you Gynt for featuring this in 'Greetings and Posters'. Very much appreciated.

Thank you Bob for featuring my work in 'Kansas City Metro-Plex'. I really appreciate it.

Thank you, Becky. Appreciate the vote too.

Thank you Julie, for featuring my work in 'Impressionists of the 21st Century'.

Thank you Darren, for featuring my work in '3 A Day Greeting Cards'. I truly appreciate it.

Bruce, thank you for featuring my work in 'Comfortable Art'