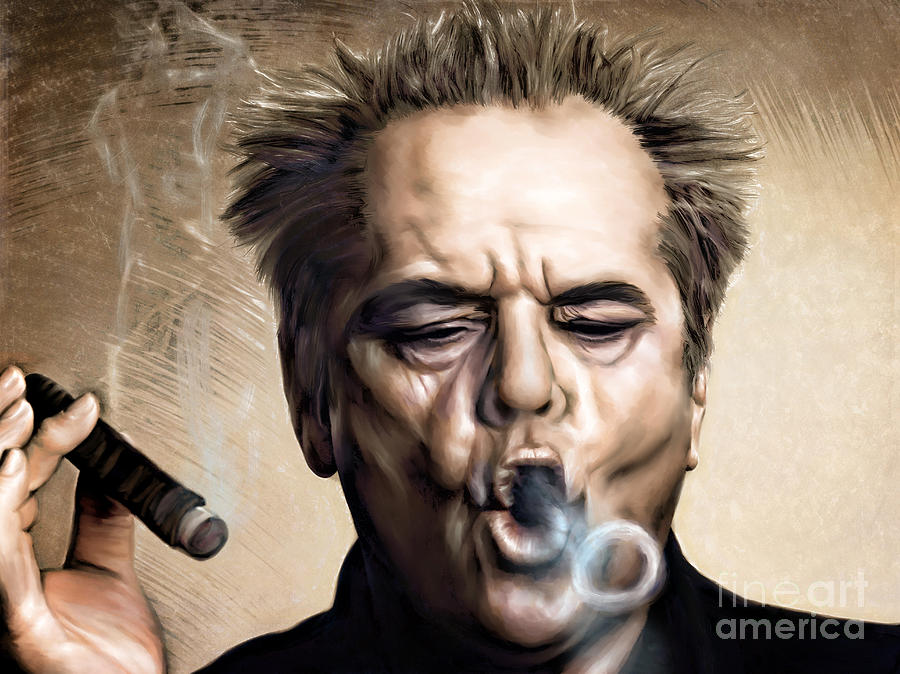 Jack Nicholson is a painting by Andrzej Szczerski which was uploaded on August 2nd, 2012.

Jack" Nicholson is an American actor, film director, producer, and writer. He is renowned for his often dark portrayals of neurotic characters. His twelve Oscar nominations make him the second most nominated actor of all time, behind only Meryl Streep,
Nicholson has been nominated for an Academy Award twelve times and has won the Academy Award for Best Actor twice: for One Flew Over the Cuckoo's Nest and for As Good as It Gets. He also won the Academy Award for Best Supporting Actor for the 1983 film Terms of Endearment. He is tied with Walter Brennan for most acting wins by a male actor (three). Nicholson is well known for playing villainous roles such as Jack Torrance in The Shining, Frank Costello in The Departed, and the Joker in 1989's Batman, among many other roles.

Nicholson is one of only two actors who have been nominated for an Academy Award for acting in every decade from the 1960s to 2000s; the other is Michael Caine. He has won seven Golden Globe Awards, and received a Kennedy Center Honor in 2001. In 1994, he became one of the youngest actors to be awarded the American Film Institute's Life Achievement Award. Notable films in which he has starred include Easy Rider, Five Easy Pieces, Chinatown, One Flew Over the Cuckoo's Nest, The Passenger, The Shining, Reds, Terms of Endearment, Batman, A Few Good Men, As Good as It Gets, About Schmidt, and The Departed.

Andrzej, Congratulations on your Sale!...L

A great portrait sharing his character and so expressive Andy. F/L.

HA!!, this work is just too much. Love it. One of your best. Congrats.

Hello Andy, This Is So Incredible Of Him! L/F