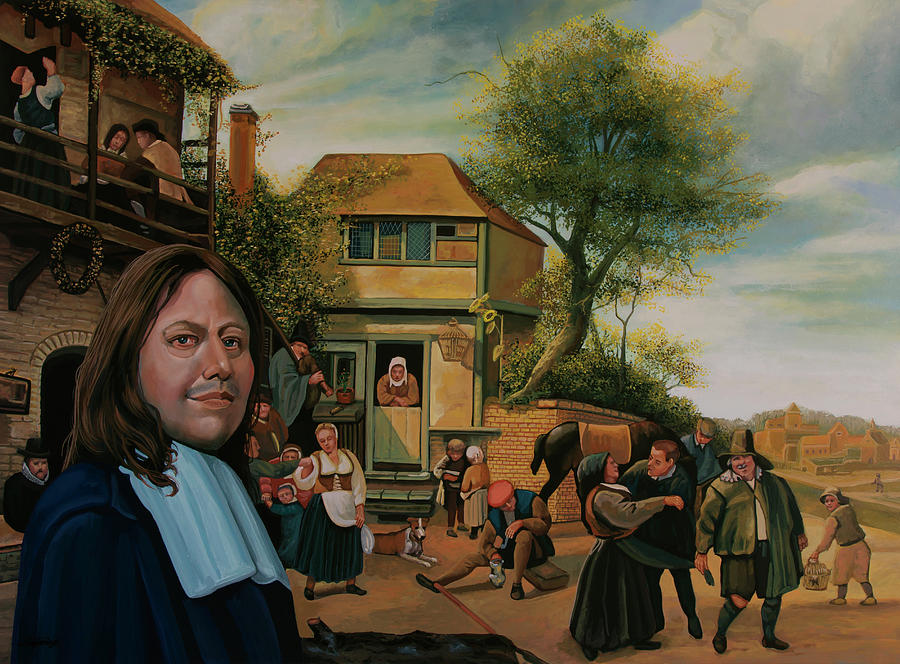 Jan Steen Peasants before an Inn Painting is a painting by Paul Meijering which was uploaded on November 2nd, 2021.

Realistic acrylic painting of the Dutch Golden Age Painter Jan Steen in front of his painting The Peasants before an Inn, painted by the Dutch fine... more

Realistic acrylic painting of the Dutch Golden Age Painter Jan Steen in front of his painting The Peasants before an Inn, painted by the Dutch fine artist Paul Meijering - the original painting is 90 x 120 cm and available for purchase

Jan Havickszoon Steen (c. 1626 – buried 3 February 1679) was a Dutch Golden Age painter, one of the leading genre painters of the 17th century. His works are known for their psychological insight, sense of humour and abundance of colour.

Steen was born in Leiden, a town in Southern Holland, where his well-to-do, Catholic family were brewers who ran the tavern The Red Halbert for two generations. Steen's father even leased him a brewery of his own in Delft from the years 1654 until 1657. He was the eldest of eight or more children. Like his even more famous contemporary Rembrandt van Rijn, Jan Steen attended the Latin school and became a student in Leiden. Though no official records of Steen's artistic training are preserved, contemporary sources tell us he received his painterly education from three men, Nicolaes Knupfer (1603–1660), a German painter of historical and figurative scenes in Utrecht, Adriaen van Ostade, and Jan van Goyen, who would later become his father-in-law. Influences of Knupfer can be found in Steen's use of composition and colour. Another source of inspiration was Isaac van Ostade, a painter of rural scenes, who lived in Haarlem.

In 1648 Jan Steen and Gabriël Metsu founded the painters' Guild of Saint Luke at Leiden. Soon after he became an assistant to the renowned landscape painter Jan van Goyen (1596–1656), and moved into his house on the Bierkade in The Hague. On Oct 3, 1649 he married van Goyen's daughter Margriet, with whom he would have eight children. Steen worked with his father-in-law until 1654, when he moved to Delft, where he ran the brewery De Slang ("The Snake") for three years without much success. After the explosion in Delft in 1654 the art market was depressed, but Steen painted A Burgomaster of Delft and his daughter. It does not seem to be clear if this painting should be called a portrait or a genre work.

Steen lived in Warmond, just north of Leiden, from 1656 till 1660 and in Haarlem from 1660 till 1670 and in both periods he was especially productive. In 1670, after the death of his wife in 1669 and his father in 1670, Steen moved back to Leiden, where he stayed the rest of his life. When the art market collapsed in 1672, called the Year of Disaster, Steen opened a tavern. In April 1673 he married Maria van Egmont, who gave him another child. In 1674 he became president of the Saint Luke's Guild. Frans van Mieris (1635- 1681) became one of his drinking companions. He died in Leiden in 1679 and was interred in a family grave in the Pieterskerk.

Congratulations, your beautiful artistic work is Featured on the home page of the "Bedroom Art Gallery" group. 11/7/21 l/f/pin

Congratulations Paul your beautiful artwork is being featured in The World We See:-) Please take a moment to add your wonderful art to our archives in the message area and have a fantastic day!

Great work, Paul!!! Congratulations, your work is Featured in "Your Best Work"! I invite you to place it in the group's "Featured Image Archive" Discussion!!

Congratulations your image has been chosen as a feature on "IF THE IMAGE EXCITES YOU" To ensure that your image remains available over time, you can archive your art in the discussion.