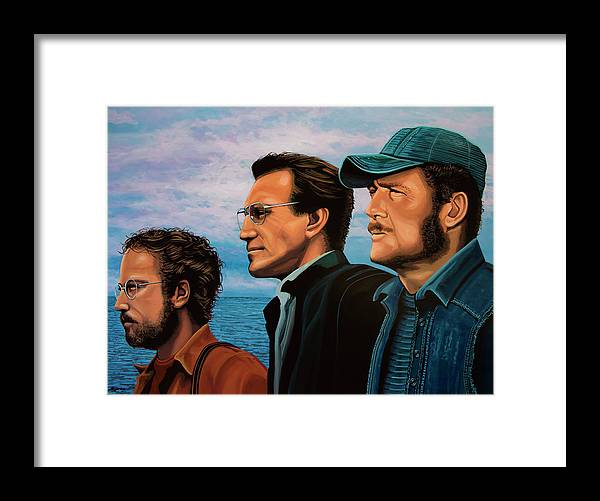 Jaws with Richard Dreyfuss, Roy Scheider and Robert Shaw framed print by Paul Meijering.   Bring your print to life with hundreds of different frame and mat combinations. Our framed prints are assembled, packaged, and shipped by our expert framing staff and delivered "ready to hang" with pre-attached hanging wire, mounting hooks, and nails.

When will this become available? I'd love to have one.

Congratulations!! This stunning image has been selected to be featured for the week in the “Art Forever with You” Group Home Page. You are welcome to add a preview of this featured image to the group’s discussion post titled “2020 October: Stunning Group Featured Images and Thank-you’s” for a permanent display within the group, to share this achievement with others. Also feel free to post your feature on our group Facebook page: https://www.facebook.com/groups/296998814248643/ Thank you for your participation in the group! ~Jan (October 6, 2020)

One of your peers nominated this image in the 1000 views Groups nominated images by your fellow artist in the Special Features #14 promotion discussion. Please visit and pass on the love to another artist.....L/F/Tw

Congratulations on being featured in the FAA Group ‘Promote Your Work Here and Get Noticed.' To ensure your feature remains available over time, post your featured image(s) in the Group's 'Thanks for the Feature / Image Archive.’ Your image has been pinned to the Group’s features board (www.pinterest.ca/tendrelimages/promote-your-work-here-get-noticed)

Thank you so very much, John, for your compliment, support and the feature in your marvelous group!!...;-))

Thank you so very much, Michael, for your compliment, support and the feature in your presentive group!!...;-))

Thank you so very much, David, for your support and the feature in your creative group!!...;-))

Now that goes back. Great cast! And nice work!

Thank you, Chad, for your kind comment! And yes, it was one on my favorite movies of all time!;-))

Wonderfull stuff paul ! Takes me back to my youth great movie!

Picture was just as I ordered it. Perfect!

We really wanted something beautiful and personal to complete our family room. The photo is stunning and it’s fun that we live only 12 miles from where it was taken! Thanks!

Beautiful representation of Our Lady of Guadalupe. The frame I chose perfectly spotlighted the image. Packaging was impressive and website was easy to use.

I really like this photo because of being connected to the small, simple building in the foreground for over 65 years. Many years of connection with family and friends experiencing nature in the Pennsylvania state forest. A place of simple amenities but, pleasures and contentment larger than the universe. Thanks for the quality preperation and prompt delivery.

I'm very happy with the art I bought, it's exactly what I was hoping for it to be. Customer service is great too

Never received this order. Have contacted you over a week ago and was told it’d be here by yesterday but that did not happen.

Realistic acrylic painting of Richard Dreyfuss, Roy Scheider and Robert Shaw in the movie Jaws, painted by the Dutch fine artist Paul Meijering - the Original painting is 120 x 90 cm and for sale Jaws is a 1975 American thriller film directed by Steven Spielberg and based on Peter Benchley's 1974 novel of the same name. In the story, a giant man-eating great white shark attacks beachgoers on Amity Island, a fictional New England summer resort town, prompting the local police chief to hunt it with the help of a marine biologist and a professional shark hunter. The film stars Roy Scheider as police chief Martin Brody, Robert Shaw as shark hunter Quint, Richard Dreyfuss as oceanographer Matt Hooper, Murray Hamilton as Larry Vaughn, the mayor of Amity Island, and Lorraine Gary as Brody's wife, Ellen. The screenplay is credited to both Benchley, who wrote the first drafts, and actor-writer Carl Gottlieb, who rewrote the script during principal photography.