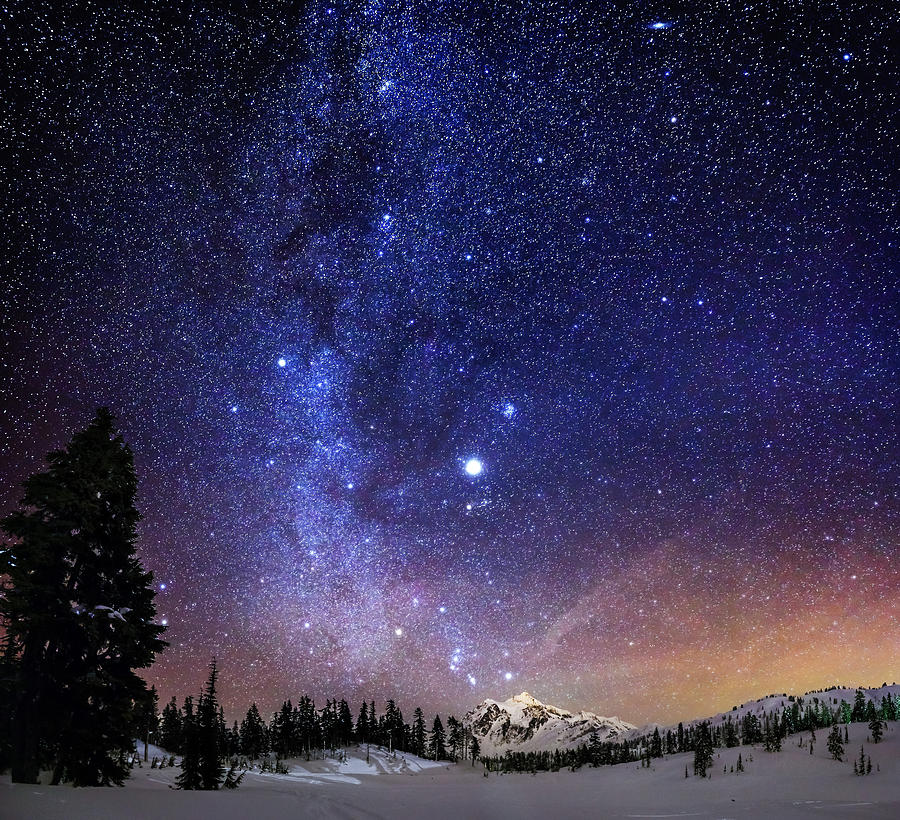 Jupiter Rising is a photograph by Alexis Birkill which was uploaded on February 15th, 2013.

Jupiter and the Milky Way visible over Mount Shuksan in Mt. Baker-Snoqualmie National Forest in Washington.

This was taken at Picture Lake in the National Forest, although there is no lake visible at this time of year. That fact came as a slight surprise to me, but not as much as the 8-9 foot tall sheer cliff of ploughed snow that I needed to climb in order to get from the road to where it used to be. If you look closely, you can see the path I waded through the snow to get to this point.

The conditions weren't as good as I had hoped, with a reasonable amount of moisture in the air reducing the clarity of the Milky Way and emphasising the glow of the city lights (even in a true dark sky location like Mount Baker, there is still a glow around much of the horizon). However, it's not bad!

Most of the landscape is lit solely by the light of the stars, but there is some light hitting the snow below the trees on the left which is from the Mount Baker Ski Area, closed at night but with some exterior lighting left illuminated.

Significant stars and constellations visible include Betelgeuse, Rigel, Orion's Belt, Aldebaran, Bellatrix, Pollux, Capella, the Pleiades, as well as Jupiter (largest, almost centre), the Double Cluster (containing around 600 stars) and several galaxies (including the smudge at the top right which is the Andromeda Galaxy, estimated to contain over one trillion stars).

Congratulations on your sale!… Carry On!

Beautiful! Congratulations on your sale!

Congratulations on your successful sale!!!

Excellent astrophotography, congratulations on your sale!