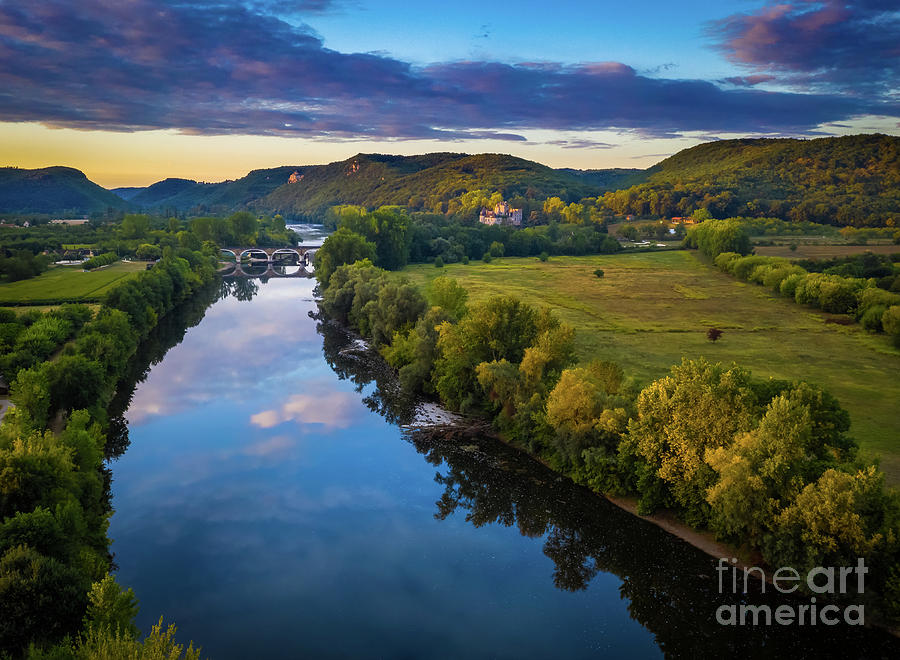 La Dordogne is a photograph by Inge Johnsson which was uploaded on November 3rd, 2019.

The Dordogne (French: La Dordogne) is a river in south-central and southwest France. The Dordogne and its watershed were designated Biosphere Reserve... more

The Dordogne (French: La Dordogne) is a river in south-central and southwest France. The Dordogne and its watershed were designated Biosphere Reserve by UNESCO on July 11 2012. The river rises on the flanks of the Puy de Sancy in the mountains of Auvergne, from the confluence of two small torrents above the town of Le Mont-Dore: the Dore and the Dogne. It flows generally west through the Limousin and Périgord regions before flowing into the Gironde, its common estuary with the Garonne, at the Bec d'Ambès ("Ambès beak"), north of the city of Bordeaux. The Dordogne is one of the few rivers in the world that exhibit the phenomenon of a tidal bore, known as a mascaret.

The upper valley of the Dordogne is a series of deep gorges. The cliffs, steep banks, fast flowing water and high bridges attract both walkers and drivers. In several places the river is dammed to form long, deep lakes. Camp sites and holiday homes have proliferated wherever the valley floor is wide enough to accommodate them.

Below Argentat and around Beaulieu-sur-Dordogne, the valley widens to accommodate fertile farmland, well-watered pasture and orchards. In the towns, which are major tourist attractions because of their history and architecture, the quaysides are lined with eating and drinking places. In Périgord, the valley widens further to encompass one of France's main gastronomic regions, with vineyards, poultry farms and truffle-rich woodlands.