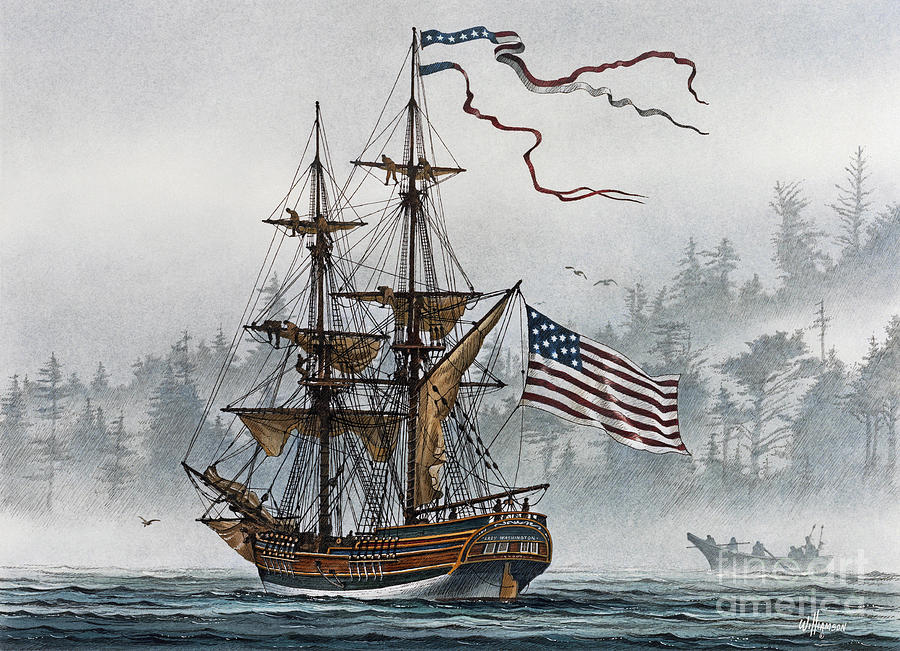 Lady Washington is a painting by James Williamson which was uploaded on August 24th, 2011.

Lady Washington By James R. Williamson
Lady Washington at Friendly Cove, Nootka Sound on the West Coast of, what is named today, Vancouver Island, British Columbia, Canada, September 16, 1788.
�Lady Washington� first began her life as a sloop, a small vessel with one mast. She was converted to a brigantine, two masts, in 1790-1791, while in Macao, China, under the command of Captain Kendrick.
�Lady Washington�, along with �Columbia� sailed from Boston in 1787, around Cape Horn to the Northwest Coast of North America, reaching Nootka Sound in 1788. She sailed onward to China and Japan via the Sandwich Islands and returned to the Pacific Northwest a number of times along this Pacific route. �Columbia� sailed to Boston and was the first American vessel to circumnavigate the globe.
The objective of the brave ships and crews, under the command of Captain Robert Gray and Captain Kendrick was to engage in sea otter fur trade, gather furs from the Indians on the Northwest Coast and sell them in Canton, China.
A replica of �Lady Washington� was built by Gray�s Harbor Historical Seaport in Aberdeen, Washington in 1989. The ship sails to ports throughout the Pacific Northwest and along the Pacific Coast. You can visit the ship and rediscover the days of 200 years past when the intrepid Yankee traders Robert Gray, John Kendrick and crews first came to the Northwest. Feel the tang of salt spray, hear the cry of gulls as the stout brigantine, a bone in her teeth, once again sails the waters of the Northwest. Scamper up the ratlines to the masthead on a tossing deck. Eyes wide, set and furl sail as the skipper take sights. Bowl gracefully along, sails pulling as you find your way across the trackless ocean.
Artwork Copyright � 1990 James R. Williamson All rights reserved.

Congratulations on your sale! Blessings!

Congratulations on your Sale. Felicidades

Beautiful work; Congratulations on your sale!!

Congrats on your Sale

Your wonderful art is an inspiration to us all here....keep creating !!

James, you are an exquisite technician!!! I just love your tall ships. Thank you so much for sharing.

Bonnie: I takes a while for me to reply. Your positive comment means a lot to me and gives me new energy to create. Jim

Kip: Thanks for your positive comment. I appreciate it. Jim