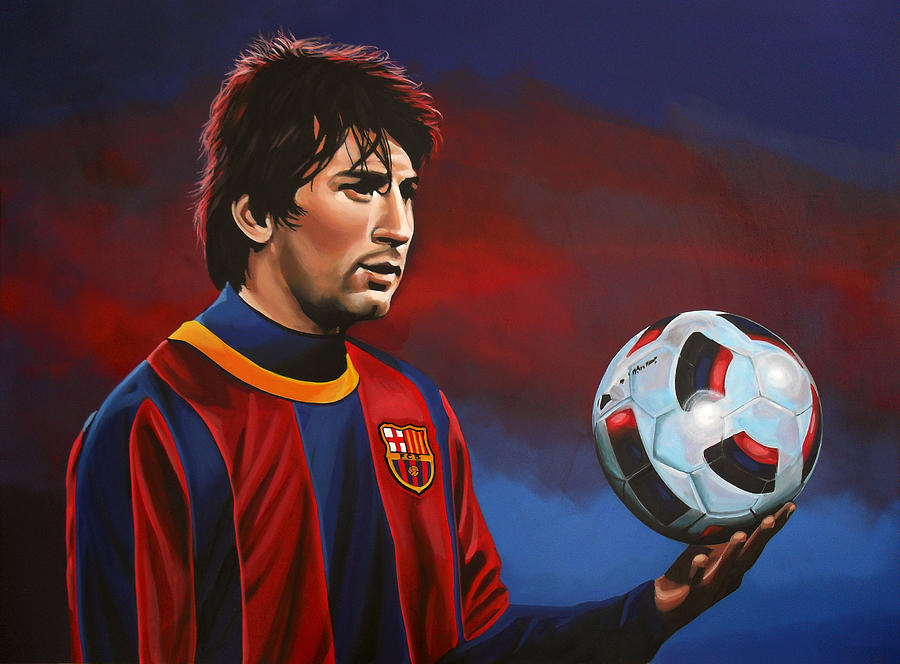 Lionel Messi 2 is a painting by Paul Meijering which was uploaded on January 2nd, 2013.

Lionel Andrés "Leo" Messi (born 24 June 1987) is an Argentine professional footballer who plays as a forward for Spanish club FC Barcelona and the Argentina national team. Often considered the best player in the world and regarded by many as the greatest of all time, Messi is the only player in history to win five FIFA Ballon d'Or awards, four of which he won consecutively, and the first to win three European Golden Shoes. He has won 29 trophies with Barcelona, including eight La Liga titles, four UEFA Champions League titles, and five Copas del Rey. Both a prolific goalscorer and a creative playmaker, Messi holds the records for most official goals scored in La Liga (349), a La Liga season (50) and a club football season in Europe (73), as well as those for most assists made in La Liga (137) and the Copa América (11). He has scored over 500 senior career goals for club and country.

Three successful seasons followed, with Messi winning three consecutive FIFA Ballons d'Or, including an unprecedented fourth. His personal best campaign to date was the 2011-12 season, in which he set the La Liga and European records for most goals scored in a single season, while establishing himself as Barcelona's all-time top scorer in official competitions in March 2012. He again struggled with injury during the following two seasons, twice finishing second for the Ballon d'Or behind Cristiano Ronaldo, his perceived career rival. Messi regained his best form during the 2014-15 campaign, breaking the all-time goalscoring records in both La Liga and the Champions League in November 2014, and led Barcelona to a historic second treble.

Thank you so very much, Jaqueline, for your compliment, support and the feature in your fantastic group!!;-))

Congratulations! Your outstanding art work was featured in the group "FIVE STAR ARTIST"!

Thank you so very much, Sergio, for your compliment, support and the feature in your wonderful group!!;-))

Thank you so very much, David, for your support and the feature in your creative group!!;-))

Perfect Colour tones with so much realism. Great!

Thank you, Umesh, for your compliments!;-)

Thank you so very much, Rebecca, for the feature and all your support!;-))

Thank you so much, Sourav!

Paul Congrats on your sale!!

Thank you so much, Joyce!