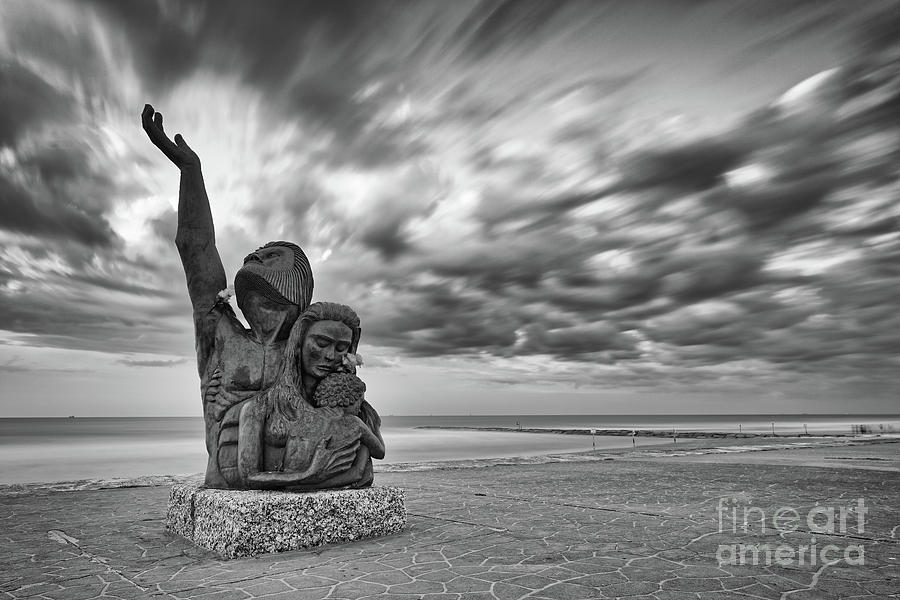 Long Exposure Of The 1900 Hurricane Storm Memorial At The Galveston Seawall - Texas Gulf Coast is a photograph by Silvio Ligutti which was uploaded on October 17th, 2017.

The Galveston Hurricane of 1900 to date is the deadliest natural disaster ever to strike the United States, taking the lives of an estimated 8,000 - 12,000 people in and around the area of Galveston, Texas. At landfall the estimated sustained winds were 135 miles per hours, making it a Category 4 storm on the Saffir-Simpson Scale. The city of Galveston was hit hard by high winds and up to 15 foot storm surges. Much of the city was covered in water as the highest point in Galveston is not even 9 feet above sea level. The surge knocked buildings off their foundations, and the surf pounded them to pieces. Over 3,600 homes were destroyed, and a wall of debris faced the ocean. The few buildings which survived, mostly solidly-built mansions and houses along the Strand, are today maintained as tourist attractions. All said and done, Galveston lost approximately a fifth of its population. The bodies were so numerous that burial was not a viable option. Initially, the dead were taken out to sea and dumped. However, the currents of the gulf washed the bodies back onto the beach, so a new solution was needed. Funeral pyres were set up wherever the dead were found. In the aftermath of the storm, pyres burned for weeks. They had to pass out free whiskey to the work crews that were having to throw the bodies of their wives and children on the burn piles. Prior to the Hurricane of 1900, Galveston was considered to be a beautiful and prestigious city and was known as "the New York of the South." Many people say that had it not been for the hurricane, Galveston would today be one of the nation's largest and most beautiful cities. However, development shifted north to Houston, which was enjoying the benefits of the oil boom.

Beautiful! Love how the clouds enhance this image!