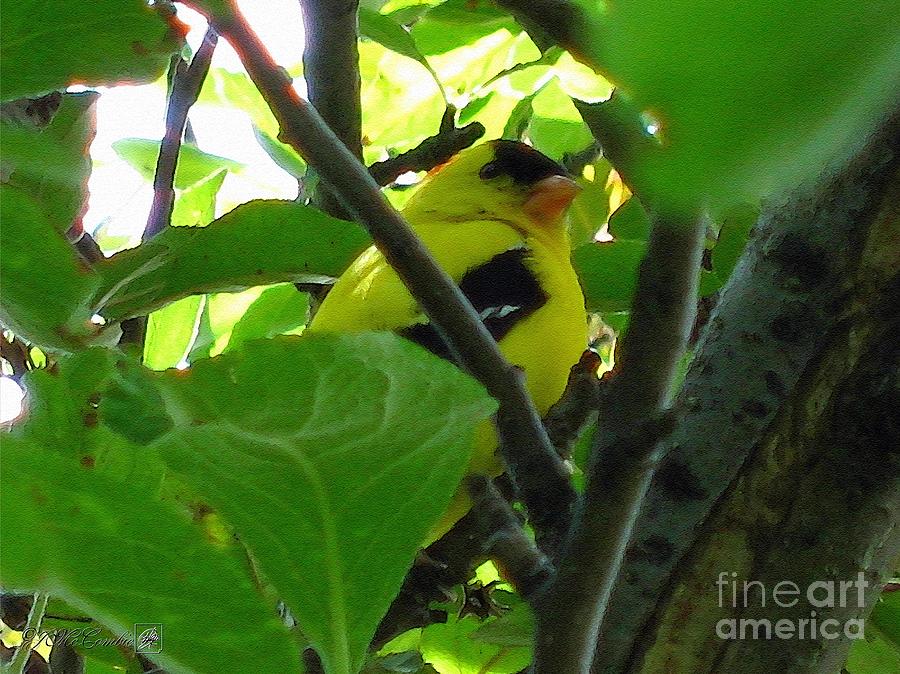 Male American Goldfinch is a painting by J McCombie which was uploaded on September 27th, 2011.

The American Goldfinch (Carduelis tristis), also known as the Eastern Goldfinch and Wild Canary, is a small North American bird in the finch family.... more

The American Goldfinch (Carduelis tristis), also known as the Eastern Goldfinch and Wild Canary, is a small North American bird in the finch family. It is migratory, ranging from mid-Alberta to North Carolina during the breeding season, and from just south of the Canadian border to Mexico during the winter.
The only finch in its subfamily that undergoes a complete molt, the American Goldfinch displays sexual dimorphism in its coloration; the male is a vibrant yellow in the summer and an olive color during the winter months, while the female is a dull yellow-brown shade which brightens only slightly during the summer. The male displays brightly colored plumage during the breeding season to attract a mate.
The American Goldfinch is a granivore and adapted for the consumption of seedheads, with a conical beak to remove the seeds and agile feet to grip the stems of seedheads while feeding. It is a social bird, and will gather in large flocks while feeding and migrating. It may behave territorially during nest construction, but this aggression is short-lived. Its breeding season is tied to the peak of food supply, beginning in late July, which is relatively late in the year for a finch. This species is generally monogamous, and produces one brood each year.
Human activity has generally benefited the American Goldfinch. It is often found in residential areas, attracted to bird feeders which increase its survival rate in these areas. Deforestation also creates open meadow areas which are its preferred habitat.