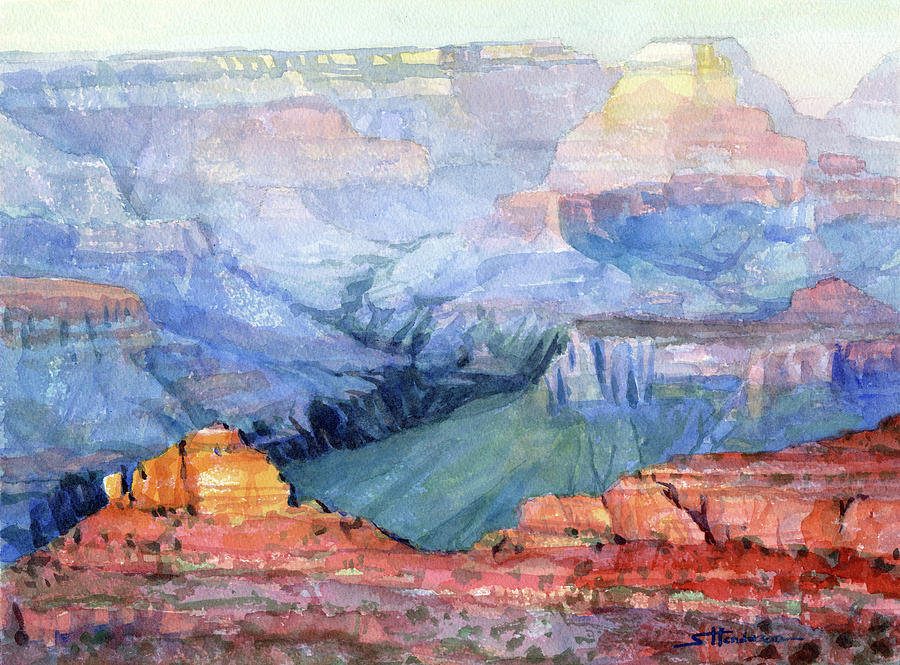 Many Hues is a painting by Steve Henderson which was uploaded on March 30th, 2017.

While the Grand Canyon National Park in the Southwest state of Arizona is indeed a national treasure, it’s important to realize that it doesn’t “belong” to the United States, or to the state of Arizona, or the National Park System, or even – what everybody likes to say but doesn’t really mean – to the “people” of the U.S.

Granted, it is located in the United States, in the Southwest, and in Arizona, and thankfully, because much of it is part of the National Park system, it is safe, for now, from being developed into a series of shopping malls and highrises, insurance and medical facilities, and housing enclaves and cul de sacs. This is very good, and if there is any benefit to government bureaucracy and agencies, this is where it lies.

But the truth is that the Grand Canyon is an anomaly of the earth itself, a natural wonder of nature that brings about a sense of awe and wonder in those who see it. One cannot “own” this, one cannot possess it to the point of saying, “This is mine. All mine. You are lucky to be here.”

It makes as much sense as saying that a corporation, simply by virtue of possessing lots of money, can advertise in the sky, or limit the amount of sunlight that reaches portions of the earth. (And while this is absurd, it is not beyond the desires of people who cannot own enough, possess enough, control enough. That we are not there yet speaks more about the limits of technology than the limits of human greed.)

Many Hues reminds us that the earth is a grand, beautiful, amazing place – one that developed quite nicely without the intervention of human beings, and one that demands our respect, our care, and our esteem.

Many Hues is featured on 22 Fine Art America groups.

Excellent! Congratulations on your sale, Steve!

To the buyer from Michigan I extend a hearty Thank you! and a wish that this artwork will brighten your day every time you look upon it. Enjoy!

Beautiful painting of the Grand Canyon in the first light of the day! LF T P

Lovely pastels in this work!

Congrts on the nice sale!! Fav

Magnificent and stunning ~ Congratulations on your sale, Steve!

Congratulations on the sale of this magnificent and beautiful work of art. You truely did capture the magic of nature and the way she speaks to us all.

To the buyer from Oregon: The artwork "Many Hues" is a celebration of nature and its color and form. May you celebrate that beauty with joy every time you contemplate this work. Thank you.