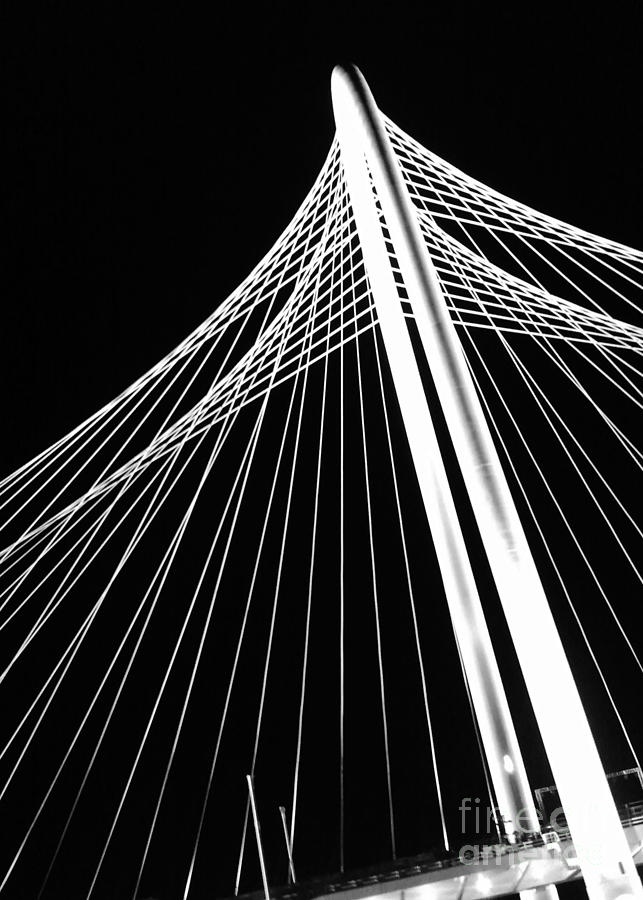 Margaret Hunt Hill Bridge is a photograph by Cheryl McClure which was uploaded on July 14th, 2012.

The Margaret Hunt Hill Bridge is one of three Santiago Calatrava-designed bridges being built over the Trinity River in Dallas, Texas (USA) as part... more

The Margaret Hunt Hill Bridge is one of three Santiago Calatrava-designed bridges being built over the Trinity River in Dallas, Texas (USA) as part of the Trinity River Project.
Construction on the bridge began in spring 2007 with the steel being manufactured in an Italian steel factory often used by Calatrava to manufacture his designs. The factory made the steel for his Athens stadium. Upon completion, it will connect Spur 366 (Woodall Rodgers Freeway) in downtown to Singleton Boulevard in west Dallas. The cable-stayed bridge is to cost $93 million, its total length will be 1,870 feet (570 m) with a main-span of 1,197 feet (365 m), and an apex-height of 400 feet (122 m).
On Saturday, June 26, 2010, the signature, 40-story center-support-arch was topped-off with a central curved span, providing an additional feature to the Dallas skyline, as it can now be seen from many miles away from several directions.
The inaugural lighting of the Margaret Hunt Hill Bridge.
The bridge was officially lit in a special ceremony conducted by the City of Dallas and Mayor Mike Rawlings. While the bridge's opening was originally scheduled for March 2�4, 2012, and the Bridge Celebration scheduled for March 4, 2012, the actual opening was delayed to March 29, 2012.

The bridge is featured in the opening credits of the 2012 version of the TV series Dallas.

Since I live in the Dallas area, I see a lot of different photos of this bridge. This is really nice--I like the perspective you use here. /v

Mark - I appreciate your comment and vote! It's an awesome bridge, isn't it?

Excellent work on this!

Great work Cheryl,Love the b/w Congrats on your sale!!! v

Thank you Joyce. I appreciate your comment and vote!