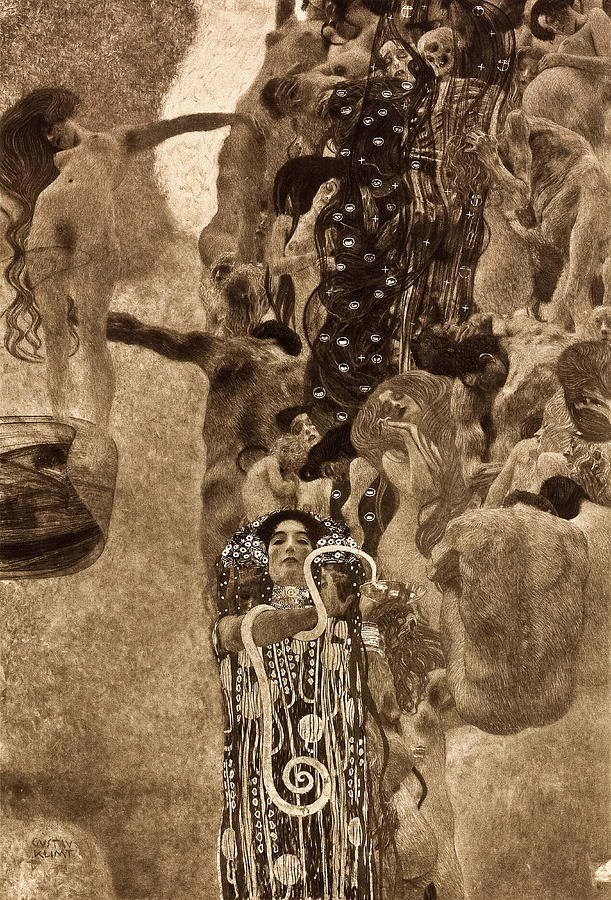 Medicine was the second of University of Vienna Ceiling Paintings, presented in March 1901 at the tenth Secession Exhibition. It featured a column of... more

Medicine was the second of University of Vienna Ceiling Paintings, presented in March 1901 at the tenth Secession Exhibition. It featured a column of nude figures on the right hand side of the painting, representing the river of life. Beside it was a young nude female who floated in space, with a newborn infant at her feet, representing life. A skeleton represented death in the river of life. The only link between the floating woman and the river of bodies is two arms, the woman's and a man's as seen from behind. Figure of Hygeia, the mythological daughter of the god of medicine is shown at the bottom of the painting. Hygieia stood with the Aesculapian snake around her arm and the cup of Lethe in her hand, turning her back to mankind. Klimt conveyed an ambiguous unity of life and death, with nothing to celebrate the role of medicine or the science of healing.
Klimt was loyal to traditional depictions of the goddess, providing her with a snake and the cup of Lethe. However, above Hygeia, Klimt painted a large column of light, and placed on either side several nude figures and, most notably, a skeleton to symbolize Death. For this Klimt received much criticism from physicians and university officials who were offended by what they saw as his lurid, almost pornographic depiction, of the human form, and for suggesting that the healing arts were unable to prevent death. Klimt's University paintings, of which Medicine was a part, were some of his first works to explore the female form in vivid detail.