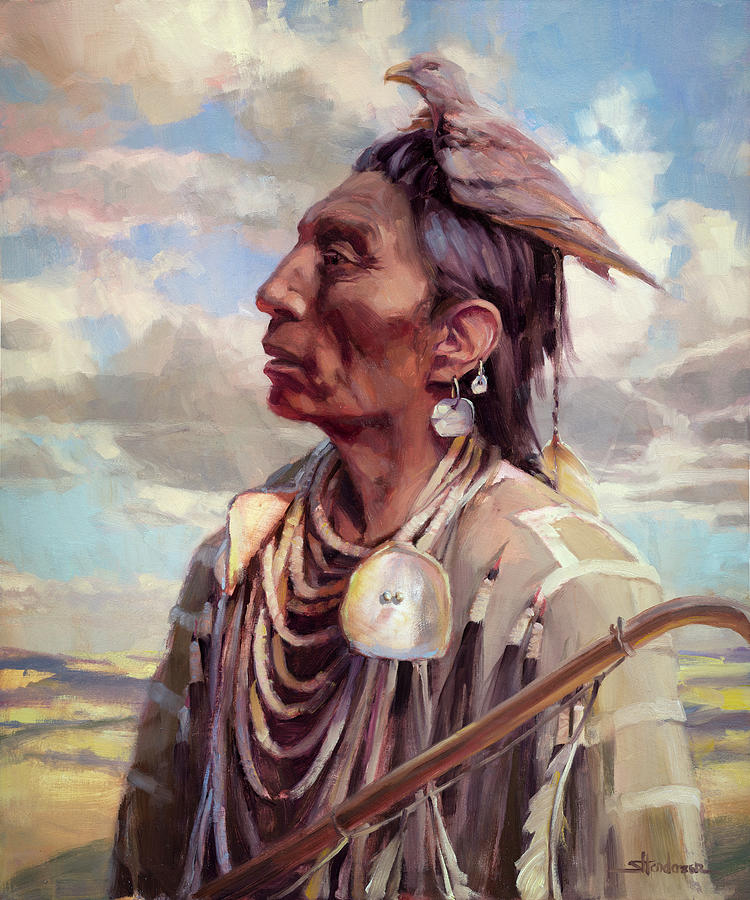 Medicine Crow is a painting by Steve Henderson which was uploaded on March 28th, 2018.

Medicine Crow, a member of the Crow people whose territory extended through Montana, Wyoming, and into North Dakota, was born in 1848. By the time... more

Medicine Crow, a member of the Crow people whose territory extended through Montana, Wyoming, and into North Dakota, was born in 1848. By the time of his birth, his father had died in what historians speculate to be a smallpox epidemic. His mother later married the noted medicine man, Bull Goes Hunting, who factored greatly in Medicine Crow’s growing up.

Legend tells that Medicine Crow saw many prophetic visions. One of them, experienced when he was 18, and after four days and three nights of fasting, foretold the passing away of the buffalo, as well as the coming of the white man with his cattle, horses, steamboats, and thirst for land. Other visions foretold the arrival of the railroad (“something black with round legs”) and planes (“wagons flying in the sky”).

A strong and determined warrior, Medicine Crow commanded 10 successful war parties, and was instrumental in fighting against the Lakota Tribe of the Plains, as well as the Nez Perce of the Pacific Northwest. As a scout for the U.S. government, he joined with the U.S. army to fight against other Native American tribes, traditional enemies of the Crow, who were resistant to the white man’s incursion.

Known for his distinction of having “thrown away” six wives, Medicine Crow exhibited the traits of humanity throughout time and place, with bravery and fearlessness interspersed with the less admirable traits of aggression and power. His alliance with the white man against Native American people from a different region is a troubling element of his personal history, and while one admires his devotion to his own tribe, one hesitates to bestow accolades without caveat upon one who used his skill and ability to attack tribes that wished, like his own people, to be left alone by the invasion of settlers from the east.

Medicine Crow, the artwork, is a painting that uses as its reference the 1908 photographic portrait of Medicine Crow taken by Edward Curtis. Notice the hawk fastened on Medicine Crow's head, a sign of his tutelary -- guardian or protector -- spirit.

Congratulations! Your beautiful image has been featured on 11/28/2021 in the group Old Masters - Painters and Traditional Arts! Please feel free to visit the group’s site and archive your feature in the proper Discussion thread.

Beautiful work, Steve!!! Congratulations, your work is Featured in "Your Best Work"! I invite you to place it in the group's "Featured Image Archive" Discussion!!

Congratulations Steve your gorgeous artwork is being featured in 500 Views Share Group & Shared:-) Please take a moment to add your beautiful art to our archives in the message area and have a wonderful day!

Outstanding portrait of Medicine Crow with excellent attention to the details! LFT

Congratulations. Your wonderful painting is now featured on the Over 3000 Views home page. I am proud to display your talents. Please post it in the appropriate discussion threads for more exposure.

Congratulations Steve on your feature in the group OBSESSED Painters Paintings

Love the Indian face and posture!

Have always loved this one.

Incredible tribute. Wow. Love your work so much Steve... awe inspiring to say the least.

Outstanding portrait of Medicine Crow with excellent attention to the details!

I'm so taken in by the hawk, the facial features....you can feel his gaze.