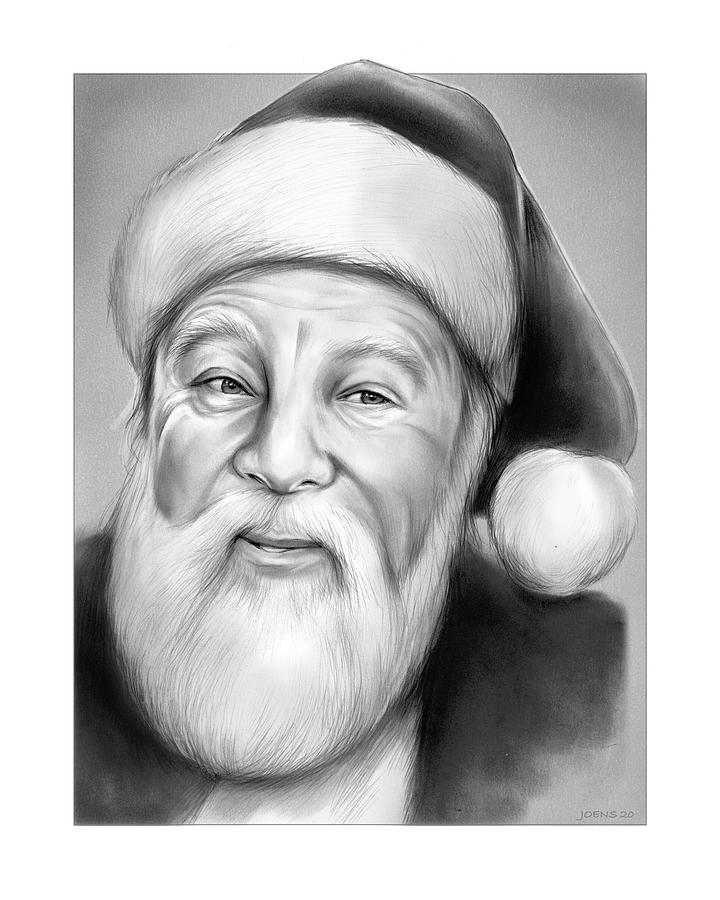 Miracle Santa - Pencil is a drawing by Greg Joens which was uploaded on December 11th, 2020.

Santa Claus, also known as Father Christmas, Saint Nicholas, Saint Nick, Kris Kringle, or simply Santa, is a legendary character originating in Western Christian culture who is said to bring gifts to the homes of well-behaved children on the night of Christmas Eve (24 December) or during the early morning hours of Christmas Day (25 December) and coal to naughty kids. The modern character of Santa Claus was based on traditions surrounding the historical Saint Nicholas (a fourth-century Greek bishop and gift-giver of Myra), the British figure of Father Christmas, and the Dutch figure of Sinterklaas (himself also based on Saint Nicholas). Some maintain Santa Claus also absorbed elements of the Germanic deity Wodan, who was associated with the pagan midwinter event of Yule and led the Wild Hunt, a ghostly procession through the sky.

Santa Claus is generally depicted as a portly, jolly, white-bearded man—sometimes with spectacles—wearing a red coat with white fur collar and cuffs, white-fur-cuffed red trousers, red hat with white fur, and black leather belt and boots and carrying a bag full of gifts for children. This image became popular in the United States and Canada in the 19th century due to the significant influence of the 1823 poem "A Visit from St. Nicholas." Caricaturist and political cartoonist Thomas Nast also played a role in the creation of Santa's image.[3][4][5] This image has been maintained and reinforced through song, radio, television, children's books, films, and advertising.

In modern folklore, Santa Claus is said to make lists of children throughout the world. He categorizes them according to their behavior. He then sets out to deliver presents, including toys and candy, to all of the well-behaved children in the world. Misbehaving children receive coal on the night of Christmas Eve. Santa Claus is said to accomplish this feat with the aid of his elves, who make the toys in his workshop at the North Pole. Santa Claus's flying reindeer are also said to provide assistance with pulling his sleigh. He is commonly portrayed as living at the North Pole, and laughing in a way that sounds like "ho ho ho".