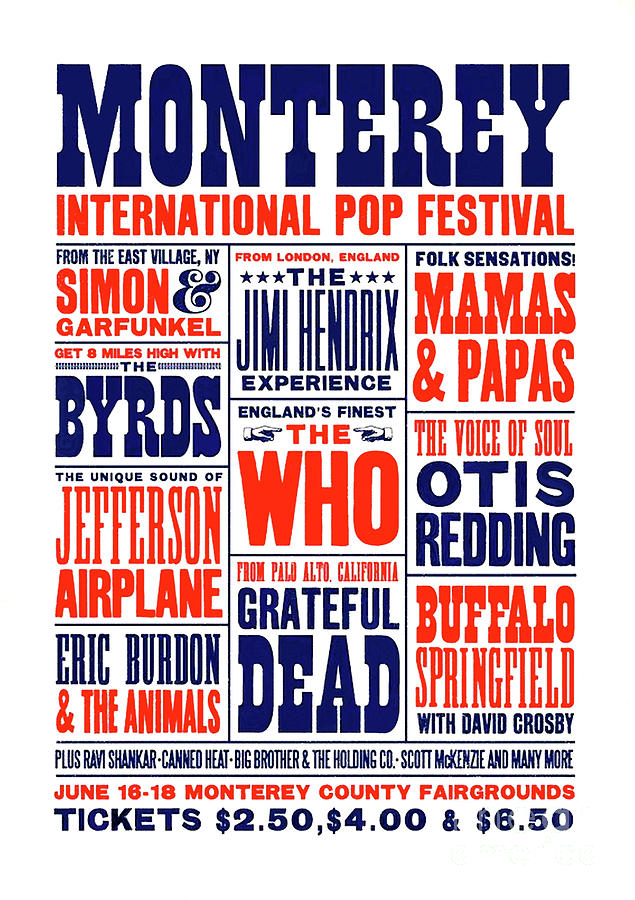 Monterey Pop Festival, poster is a mixed media by Thomas Pollart which was uploaded on November 22nd, 2018.

There were five separate shows during the three-day festival. Each performance lasted around 4 hours. Festival goers could buy a full weekend ticket, or tickets for the 5 separate shows. The showground arena, where the performances took place, had 5,850 stand seats, but many others had floor and perimeter standing tickets, allowing between 7000 and 10,000 to witness the 5 concerts held that weekend (One on Friday night, two on Saturday and two on Sunday). Tickets were also sold to allow people to enter the fairgrounds without access to the performance arena. Crowd estimates for the festival have ranged from 25,000-90,000 people, who congregated in and around the festival grounds.

The Who
Although already a big act in the UK, and now gaining some attention in the US after playing some New York dates two months earlier, the Who were propelled into the American mainstream at Monterey. The band used rented Vox amps for their set, which were not as powerful as their regular Sound City amps which they had left in England to save shipping costs. At the end of their frenetic performance of "My Generation", the audience was stunned as guitarist Pete Townshend smashed his guitar, smoke bombs exploded behind the amps and frightened concert staff rushed onstage to retrieve expensive microphones. At the end of the mayhem, drummer Keith Moon kicked over his drum kit as the band exited the stage. During Jimi Hendrix's stay in England, he and the Who had seen each other perform; they were both impressed with and intimidated by each other, so neither wanted to be upstaged by the other. They decided to toss a coin, with the Who ending up performing just before Hendrix.

The artists performed for free, with all revenue donated to charity.

The idea for Monterey was to provide the best of everything – sound equipment, sleeping and eating accommodations, transportation – services that had never been provided for the artist before Monterey ... We set up an on-site first aid clinic, because we knew there would be a need for medical supervision and that we would encounter drug-related problems. We didn't want people who got themselves into trouble and needed medical attention to go untreated. Nor did we want their problems to ruin or in any way disturb other people or disrupt the music ... Our security worked with the Monterey police. The local law enforcement authorities never expected to like the people they came in contact with as much as they did. They never expected the spirit of 'Music, Love and Flowers' to take over to the point where they'd allow themselves to be festooned with flowers.

Monterey's bill boasted a lineup that put established stars like the Mamas and the Papas, Simon & Garfunkel and the Byrds alongside groundbreaking new acts from the UK and the US.

The song "San Francisco (Be Sure to Wear Flowers in Your Hair)" was written by Phillips and sung by Scott McKenzie, released in May 1967, to promote the event.

Great Poster Recapturing of all the GREAT musicians! FAV Congratulations on your recent sale!