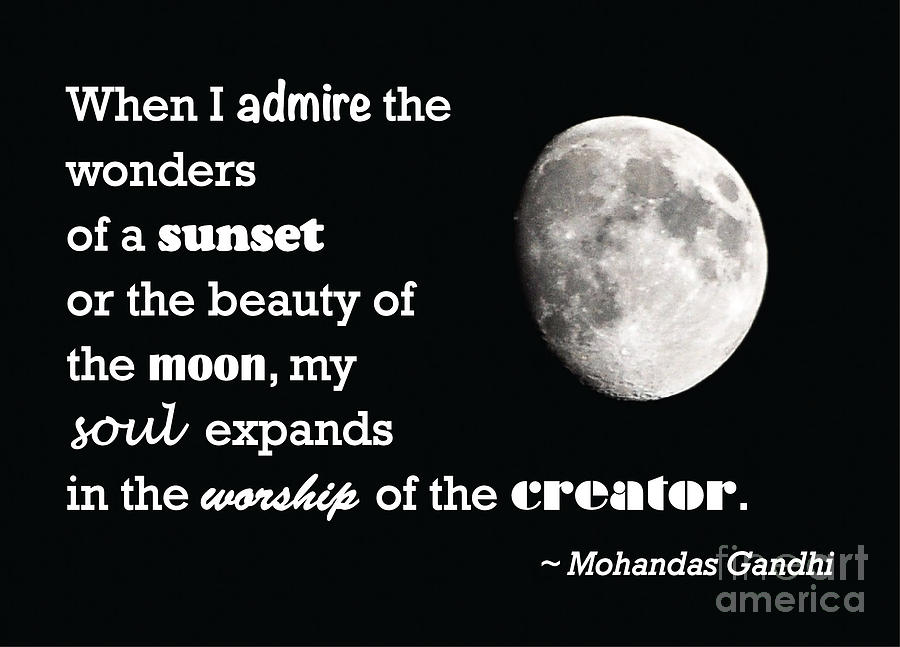 Moon Wonder is a photograph by Cheryl McClure which was uploaded on November 4th, 2013.

I liked this quote by Mohandas Gandhi because it reflects how I feel about all the beauty of the earth and stars. While watching the skies in awe as... more

I liked this quote by Mohandas Gandhi because it reflects how I feel about all the beauty of the earth and stars. While watching the skies in awe as the sun and light changes, the view can be quite spectacular to down right frightening sometimes!

Mohandas Gandhi (1869 - 1948)
Known as 'Mahatma' (great soul), Gandhi was the leader of the Indian nationalist movement against British rule, and is widely considered the father of his country. His doctrine of non-violent protest to achieve political and social progress has been hugely influential.

Mohandas Karamchand Gandhi was born on 2 October 1869 in Porbandar in Gujarat. After university, he went to London to train as a barrister. He returned to India in 1891 and in 1893 accepted a job at an Indian law firm in Durban, South Africa. Gandhi was appalled by the treatment of Indian immigrants there, and joined the struggle to obtain basic rights for them. During his 20 years in South Africa he was sent to prison many times. Influenced primarily by Hinduism, but also by elements of Jainism and Christianity as well as writers including Tolstoy and Thoreau, Gandhi developed the satyagraha ('devotion to truth'), a new non-violent way to redress wrongs. In 1914, the South African government conceded to many of Gandhi's demands.

Gandhi returned to India shortly afterwards. In 1919, British plans to intern people suspected of sedition - the Rowlatt Acts - prompted Gandhi to announce a new satyagraha which attracted millions of followers. A demonstration against the acts resulted in the Amritsar Massacre by British troops. By 1920, Gandhi was a dominant figure in Indian politics. He transformed the Indian National Congress, and his programme of peaceful non-cooperation with the British included boycotts of British goods and institutions, leading to arrests of thousands.

In 1922, Gandhi himself was sentenced to six years' imprisonment. He was released after two years and withdrew from politics, devoting himself to trying to improve Hindu-Muslim relations, which had worsened. In 1930, Gandhi proclaimed a new campaign of civil disobedience in protest at a tax on salt, leading thousands on a 'March to the Sea' to symbolically make their own salt from seawater.

In 1931, Gandhi attended the Round Table Conference in London, as the sole representative of the Indian National Congress, but resigned from the party in 1934 in protest at its use of non-violence as a political expedient. He was replaced as leader by Jawaharlal Nehru.

In 1945, the British government began negotiations which culminated in the Mountbatten Plan of June 1947, and the formation of the two new independent states of India and Pakistan, divided along religious lines. Massive inter-communal violence marred the months before and after independence. Gandhi was opposed to partition, and now fasted in an attempt to bring calm in Calcutta and Delhi. On 30 January 1948, he was assassinated in Delhi by a Hindu fanatic.

Your image is being promoted in our group Beauty Captured!