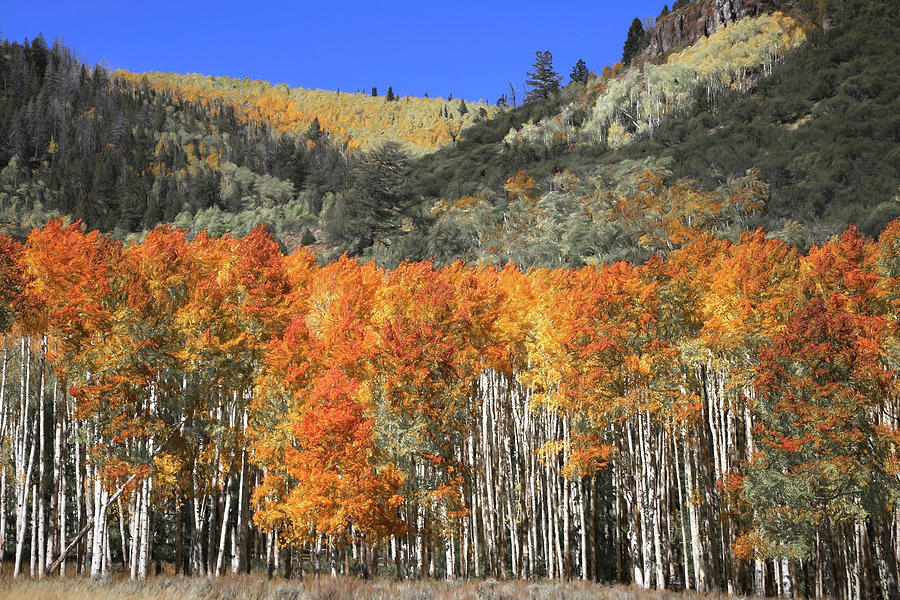 Mountainside Aspen Abstract is a photograph by Donna Kennedy which was uploaded on December 18th, 2019.

Fishlake National Forest is a U.S. National Forest located in south central Utah. The namesake for the forest is Fish Lake, the largest freshwater mountain lake in the state.
Established in 1907, the forest covers 1.5 million acres and is split into four districts. The forest lies in parts of nine counties.
Pando, a clonal quaking aspen stand, that, according to sources, is the oldest (80,000 years) and largest (106 acres, 13 million pounds) organism on Earth, is located in the Fremont River Ranger District of the National Forest, 1 mile southwest of Fish Lake on Utah route 25.
Quaking aspen is the most widely distributed native North American tree species, growing in greatly diverse regions, environments, and communities. It occurs across Canada, through the United States, to Mexico, in a variety of habitats. In the western United States, aspen is generally found at 5,000 to 12,000 feet elevation. Aspen occurs in extensive pure stands in some areas, while in others, it is a minor component of the forest landscape. Most of the aspen forest in the United States is found in Utah and Colorado, though it is also scattered throughout all of the western states. The quaking aspen is named for its leaves, which stir easily in even a gentle breeze and produce a fluttering sound with only the slightest provocation.

Thank You to the Administrators that Featured this photo in the following Groups:
-Arts Fantastic World
-USA Photographers ONLY
-Glimpses of Autumn
-Wisconsin Flowers and Scenery
-Paints and Art Photography
-Orange-Yellow-Red Photos and Paints
-Artist Salon 1
-Topaz Simplify-Glow-Impression Photo Renderings
-Everything Fall or Autumn
-Art-It Is Good For You

Great composition Donna! I love all the layers of colors and textures! l/t

Thank you Jeff for the visit and Feature! :)

Congratulations your wonderful work is now featured on Artist Salon 1! Please add your work to our Discussion archive for features.

Thank you Randy for the visit, L/F and Feature! :)

This piece of fine artwork has earned the honor of being chosen to show off to other artists and prospective buyers here in the Wisconsin Flowers and Scenery group. It is an honor to share this piece of well composed and beautiful art on our Featured section of our homepage. Thanks much for sharing! Liked and Faved Randy B. Rosenberger (administrator of the WFS group)

Thank you so much Lois, maybe one day you can make it out West!! :)

Donna I have to admit to you, I am pea-green with jealousy that you get to see this beautiful part of our country at this most beautiful time of year. But ... I get to view all your lovely captures ... and it's certainly the next best thing to being there. So thank you!!!! l/f t

Wonderful colors and a great foliage! Love the foreground too.L/F