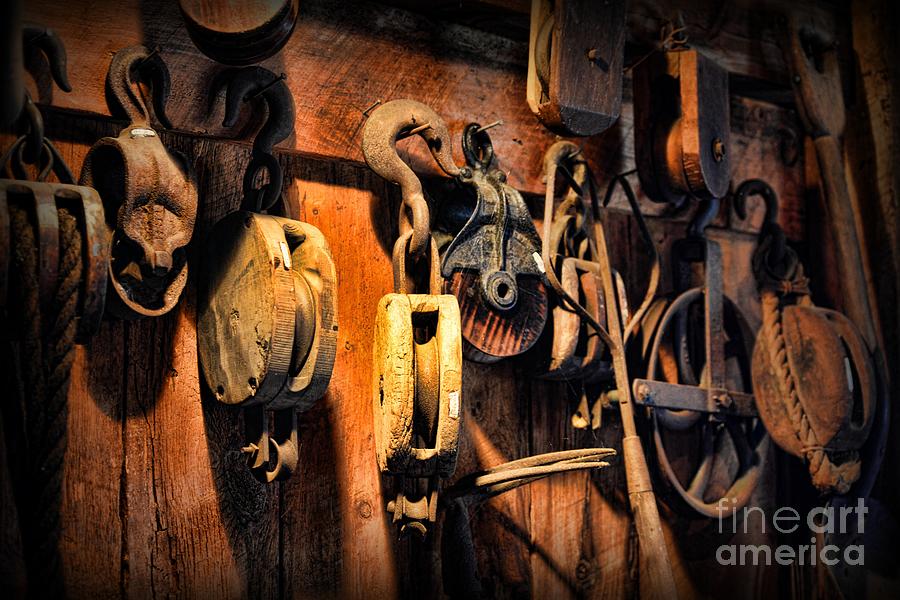 Nautical - Boat - Block and Tackle is a photograph by Paul Ward which was uploaded on November 23rd, 2012.

Whether you call them pulleys, sheaves, or blocks, these ancient devices make light work of heavy loads. A single pulley can cut the amount of force... more

Whether you call them pulleys, sheaves, or blocks, these ancient devices make light work of heavy loads. A single pulley can cut the amount of force needed to lift an object in half. Multiple pulleys threaded with rope or wire, known as block and tackle, can reduce the energy required to hoist an object into the air even more.

Strictly speaking, the blocks of a pulley are the wood, bronze, brass, or cast-iron pieces that sandwich the grooved sheave, which can be made of just as many different types of materials. Most pulleys have no more than three sheaves because at a certain point the friction created by pulling a rope through that many channels offsets the benefit of the block-and-tackle system itself.

One of the most common types of pulleys collected by fans of Americana is the barnyard pulley, which usually featured wood blocks, metal sheaves, and a cast iron hook. Other barn pulleys were more decorative, with embossed or pierced cast-iron blocks and handsome wooden sheaves. Regardless of their design, these pulleys were typically used to lift bales of hay into the lofts of barns. Pulleys at the top of wells tended to be more decorative than those mounted under the eaves of barns since they were so much more visible to the user.


Of course, many antique and vintage pulleys spent their working lives aboard ships and sailboats, doing everything from setting sails to hauling cargo from the end of a boom onto a boat�s deck, into its hold, or ashore. Vintage pulleys acquired by contemporary collectors may also have been attached to the ends of heavy steel davits, which are commonly used to lower lifeboats and other small craft from a larger vessel into the sea.

Many thanks to the art collector from Hackensack, NJ. - you have EXCELLENT taste :)

Thank you to the buyer from Avon, OH. - you have excellent taste :)

Thank you to the art collector from Mooresville, NC. - your taste is EXCELLENT :)

Beautiful composition and lighting. Congratulations on your sale.

My God. You take my breath away.

Thank you to the collector from Spangdahlem, AE - Germany. - Your taste is EXCELLENT :)

Beautiful composition, Congratulations on your sale!

Beautiful Work! Congrats on SALE! All the very best to you. RJF

Congratulations on the Sale. Felicidades

Thank you to the collector from from Washington, DC.- your taste is EXCELLENT :)

Very nice color and lighting....Congrats on your sale!