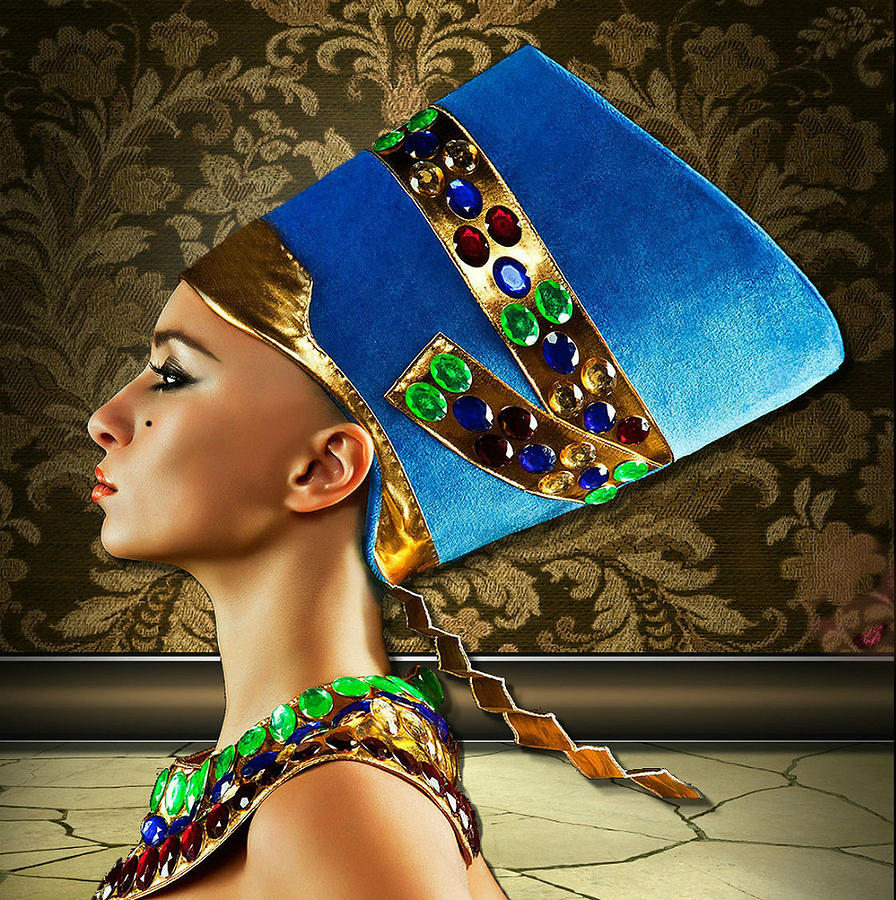 Nefertiti is a piece of digital artwork by Karen Showell which was uploaded on May 24th, 2013.

Who is Nefertiti?... more

I was sitting here trying to figure out how I could tie in the story of a Egyptian queen who did not believe in God, to the story of Christianity.

Nefertiti, whose name means "the beautiful one has come," was the queen of Egypt and wife of Pharaoh Akhenaten during the 14th century B.C.

Nefertiti was perhaps one of the most powerful women to have ever ruled. Her husband went to great lengths to display her as an equal counterpart. In several reliefs she is shown wearing the crown of a Pharaoh or smiting her enemies in battle.
Nefertiti was seen as second only to the
Pharaoh himself.

Pharaoh was simply smitten with Nefertiti.

The reason for this may have been simple:

In an age when marriages were arranged for political reasons, the partnership between Pharaoh Akhenaten and Nefertiti seems to have been unusually romantic.

Nefertiti is also the only Egyptian queen that we know to have been lovingly described by her husband, the pharaoh.

She never turned her heart over to the One true living God.

Sadly she is much like some of the ladies these days.

Some feel that just because they are beautiful, as well as sensual that they
can make in life without Jesus.

What they fail to realize is that, all may be well now, but beauty eventually fades.

But God told Samuel, �Looks aren�t everything. Don�t be impressed with his looks and stature. I�ve already eliminated him. God judges� persons differently than humans do. Men and women look at the face; God looks into the heart.�

I am sure that Nefertiti had some beautiful qualities about her, and she also had a lot of power. However with the power that she had she could have reached so many people for God, if only her heart was in the right place!

What I am saying ladies, if God has blessed you with beauty, use your beauty for His glory!

I love this one, beautiful is definitely the word.

Excellent! Congratulations on your sale Karen!

Thank you so much You are such a blessing I pray for you and your art to be song in the name of Jesus!

You grab and captured the complete royal expression on this image.

Awe thank you/ Tell Nef Hi and I dedicate it to her!

I posted on my facebook- I have a sister-in-law named for Nefertiti! We call her Nef:) Your image is so perfect!