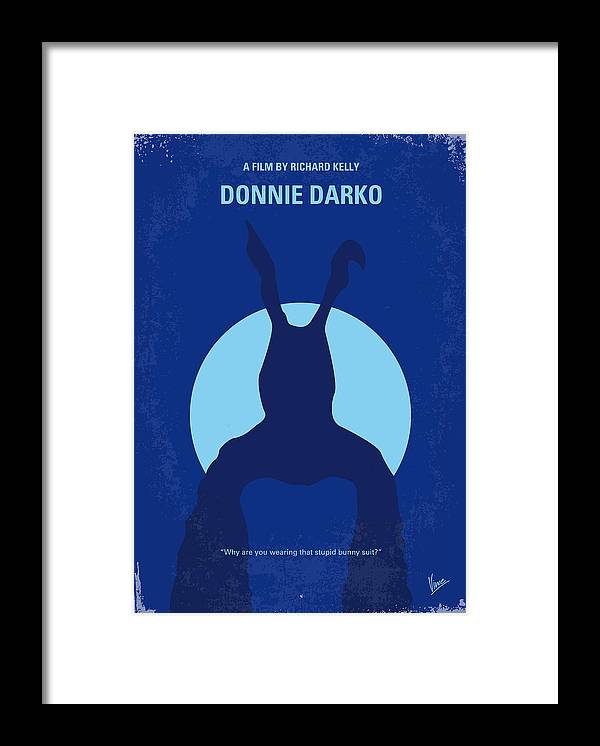 No295 My Donnie Darko minimal movie poster framed print by Chungkong Art.   Bring your print to life with hundreds of different frame and mat combinations. Our framed prints are assembled, packaged, and shipped by our expert framing staff and delivered "ready to hang" with pre-attached hanging wire, mounting hooks, and nails.

A troubled teenager is plagued by visions of a large bunny rabbit that manipulates him to commit a series of crimes, after narrowly escaping a... more

This was a gift from a friend who is a huge Jason Newsted fan. It was my friend's 50th birthday, so the occasion needed to be marked by an important gift. When I found this photograph I knew that it would be perfect. However, I was immediately worried about the shipping costs to the U.K. and how 'it would travel.' I had no need to worry. The shipping was very reasonable and the package arrived beautifully double-protected. FAA had kept me updated on it's progress and it arrived exactly when they said it would - to the hour. I drove the 200 mile round-trip to deliver it to his wife, while he was at work, so, when he rang me after he had opened it, he was just amazed. It turns out that not only has David Ilzhoefer captured 'the exact spirit of Jason' but JN is wearing THE Metallica t-shirt which my friend coveted so much, but never found, back in the day. He could not have been happier and it now hangs in his music room, with his collection of bass guitars and his albums. I could not be happier with the service and the quality of my purchase - thank you so much, Fine Art America.

I was disappointed and surprised that the picture did not come with hanging wire and a hook. Pictures I've gotten from other sites included everything. Other than that, I like the picture.

excellent work and well appreciated. Packaged professionally with no damage to the contents

To be honest, I was a little disappointed in the quality of the print. It was kinda fuzzy, and not as clear as I would have expected. The frame looks nice though. I might put a different picture in the frame.

A troubled teenager is plagued by visions of a large bunny rabbit that manipulates him to commit a series of crimes, after narrowly escaping a bizarre accident.Stars: Jake Gyllenhaal, Jena Malone, Mary McDonnellStorylineDonnie Darko doesn't get along too well with his family, his teachers and his classmates; but he does manage to find a sympathetic friend in Gretchen, who agrees to date him. He has a compassionate psychiatrist, who discovers hypnosis is the means to unlock hidden secrets. His other companion may not be a true ally. Donnie has a friend named Frank - a large bunny which only Donnie can see. When an engine falls off a plane and destroys his bedroom, Donnie is not there. Both the event, and Donnie's escape, seem to have been caused by supernatural events. Donnie's mental illness, if such it is, may never allow him to find out for sure.