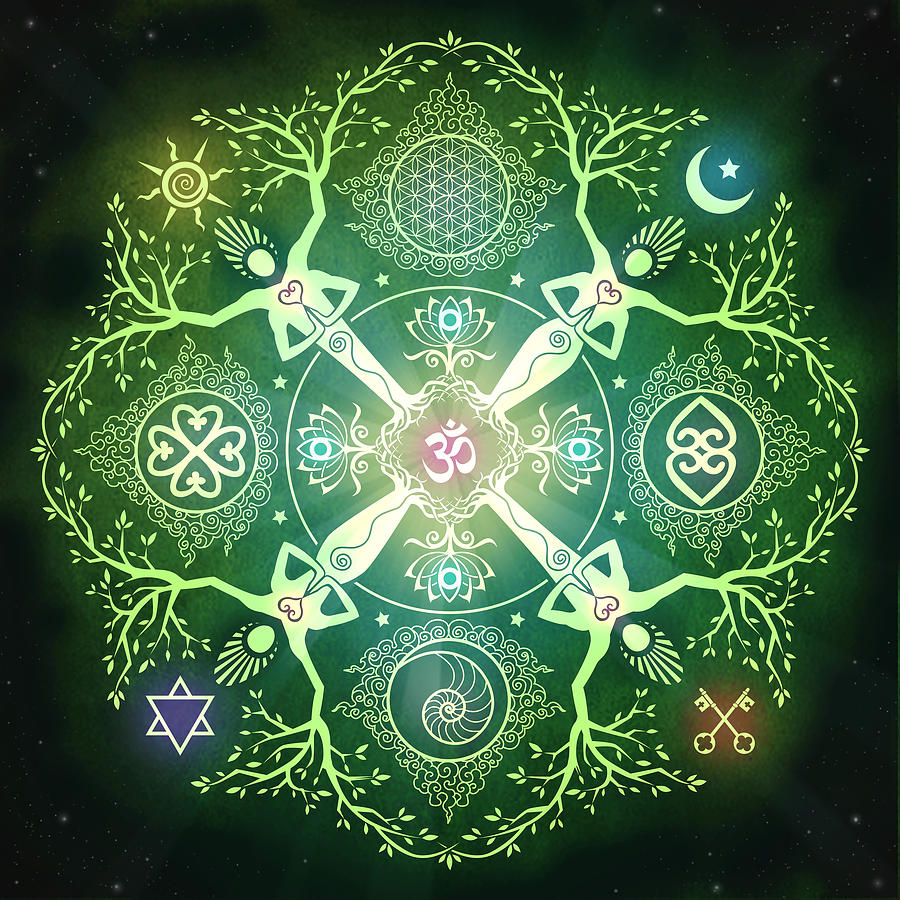 Numinosity Mandala is a piece of digital artwork by Cristina McAllister which was uploaded on May 31st, 2011.

The word numinous describes a sense of sacredness and wonder, a feeling that you are in the presence of the divine. This piece celebrates that... more

The word numinous describes a sense of sacredness and wonder, a feeling that you are in the presence of the divine. This piece celebrates that numinous experience, which for me speaks of connection, reverence and harmony with the Universe.
At the center is the symbol for Aum, said to represent the first vibration of creation that made the Universe manifest. Male and female figures radiate from it, joined by entwining roots. Each figure has two pairs of arms. One pair performs the namaste mudra, a gesture of reverence and greeting. The other pair of arms reaches up to become leafy branches that connect and embrace. A snaking spiral represents kundalini, the energy of consciousness that resides in all of us. A halo or nimbus glows around each figure's head, indicating divine nature.
Lotus flowers bloom between the figures, each with an open eye at the center, an icon of spiritual awareness.
The figures embrace four symbols; a sun, moon and star (which represent the celestial heavens beyond Earth), the Keys to Heaven (A Christian symbol representing access to Heaven) and an alchemical sign that combines the Four Elements of the Universe; earth, water, fire and air.
Four more symbols are surrounded by swirling flames. At top is the Flower of Life, a visual expression of the connections life weaves through all sentient beings. On the right is a West African adinkra symbol called ASASE YE DURU, representing providence and the divinity of Mother Earth. Below is a nautilus shell spiral, representing the Golden Ratio, also known as the Divine Proportion. This mathematical constant underlies many forms in nature, art, music, even our brainwaves. It is a sort of formula for balanced, harmonious and beautiful forms. On the left is another adinkra symbol called NYAME DUA, or "tree of god", which represents god's presence and protection.

Congratulations on your new sale! Cheers!

It really speaks to me.

Mandalas will save earth 😃

Congratulation on sale announcement and wonderful.

Nice creation, I love it!