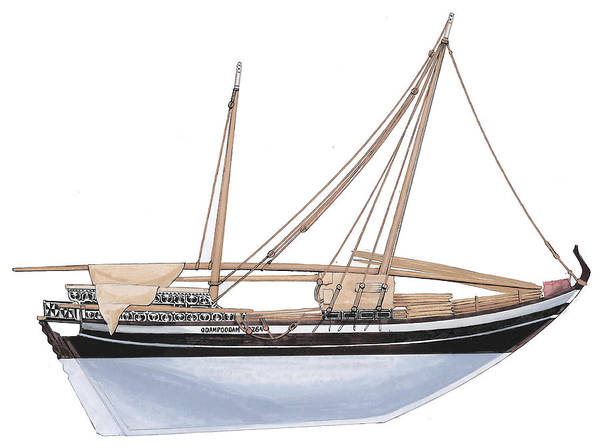 Odam poster by The Collectioner.   Our posters are produced on acid-free papers using archival inks to guarantee that they last a lifetime without fading or loss of color. All posters include a 1" white border around the image to allow for future framing and matting, if desired.

The Odam (here the Odam Poodam), is a cargo characteristic derived from Dhows used in Southern India, and originating in the Laccadives archipelago.... more

More Posters from The Collectioner

A fine representation of an Odam. I have not seen a photograph of an odam beached and did not know that they are so deep. May I ask where you got the profile shape. Also, could I use this image for an academic publication?

Thanks Nick, it's from a photo in fact, from Domonique Buisson's Encyclopédie des Voiliers EDITA SA Lausanne Compagnie du Livre d'Art 1994. Can be found if there are still on stock at the Musée de la Marine in Paris. The color photo itself is from 1973, Androth island, Laquedives Island near Beypore, it is not beached. The shape of the prow is deduced from another photo 3/4 face of Odam Rehman. The depht is deduced by using proportions from other boats of the same family, and measurements, from this book. yes you can use it, no problem. Best, David Bocquelet

Great picture my wife and I do lectures on the american revolution and speak about Major John Andre the painting will bring him alive again. Thank You Joe McDevitt

I was very impressed with the poster quality. It was printed on high quality paper, the colors were vibrant and it was packaged for shipping very well.

So beautiful, thank you!

A quality print which framed beautifully.

A satisfactory print which adequately captures the original.

The Odam (here the Odam Poodam), is a cargo characteristic derived from Dhows used in Southern India, and originating in the Laccadives archipelago. She features two leaning mastswith Arab sails (Lateen-Setie), but tops a jib on a short boat-out. As always, the bow is very sharp, though rounded, and the stern sharp and receding. Coconut wood was used for the curves. Odams had a crew of 4 to 6 men, housed in the rear castle covered with a masted roof, and supplemented by a central hut used for the storage of perishable goods. These vessels generally measured 18 meters for 5.18 meters wide with a draft of 4.30 meters. They load their cargo into a large, one-piece, decked hold. The Odam, which was still in use recently, is beginning to disappear slowly. Their ancient origin remains mysterious.