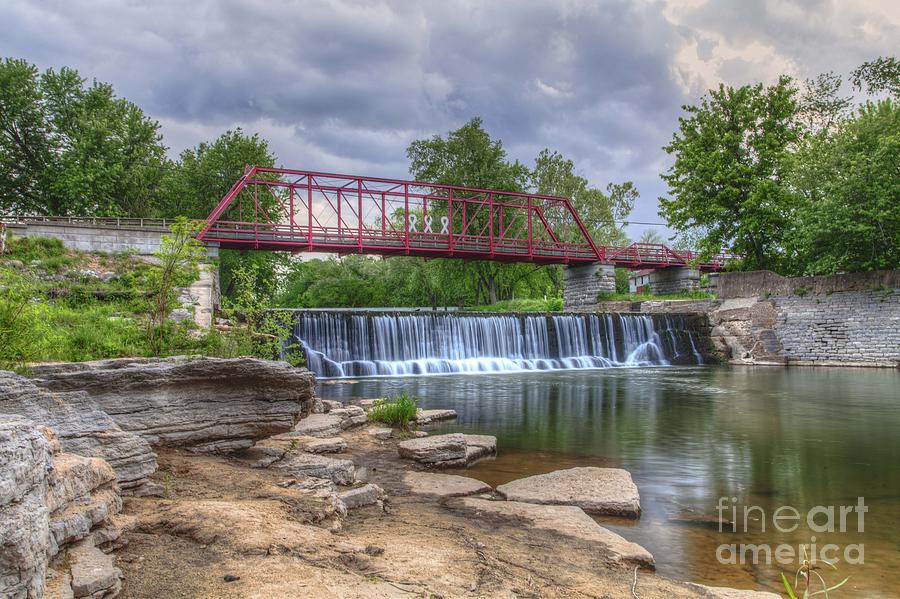 Old Appleton Bridge is a photograph by Larry Braun which was uploaded on May 17th, 2015.

"The Old Appleton Bridge is a three-span truss bridge that carried Highway 25 and is now limited to pedestrian use over Apple Creek in Old Appleton, Missouri. The bridge was manufactured and constructed by H.W. Sebastian and Co. of St. Louis in 1879. The bridge consists of a wrought iron, pin connected, Pratt through-truss main span, with two pinconnected, three panel Pratt pony-truss approach spans. The piers are constructed out of limestone block masonry that was quarried locally in the Appleton Quarry, as well as more modern concrete piers that raise the bridge over the 1982 flood level. In December of 1982, Apple Creek rose more than fifteen feet during heavy rains and the bridge washed away. One part of the bridge rested on a gravel bar and the other on the north bank. The bridge was salvaged, with each piece labeled as to where it went, and then restored by A.E. Simpson Construction in 2005 using ninety-eight percent of its original parts. Although reconstructed, the Old Appleton Bridge is one of the last remaining Pratt truss bridges of its type in Missouri. It retains its integrity though its materials, design, location and its setting in Old Appleton." - National Register Nomination

The old bridge was reconstructed through considerable effort of this small community. Many fundraisers were conducted to obtain the resources to reconstruct the bridge which is a source of community pride.

Congratulations on your sale Larry!