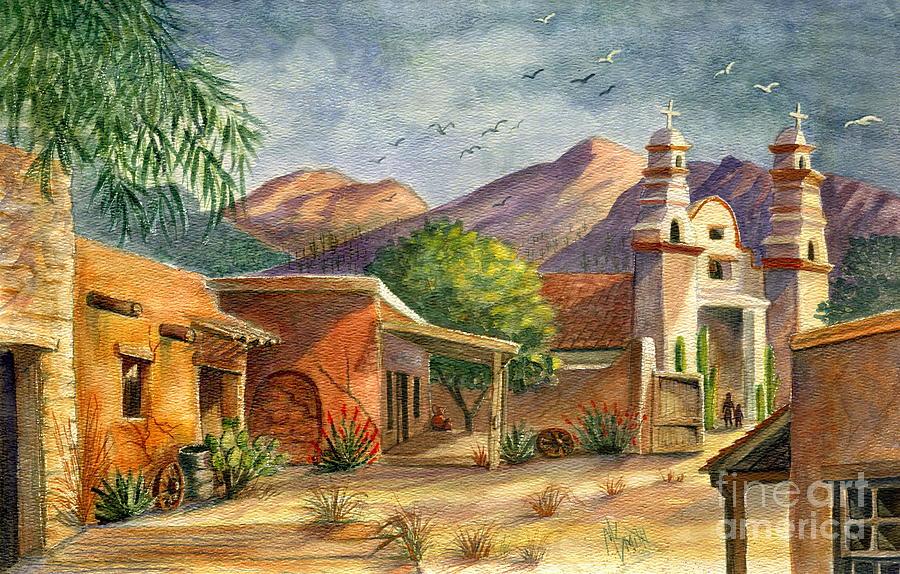 Old Tucson is a painting by Marilyn Smith which was uploaded on April 28th, 2010.

A watercolor scene from Old Tucson, movie studio, before it burned in 1995.
The studios are located west of Tucson, AZ beside the Tucson Mountains... more

A watercolor scene from Old Tucson, movie studio, before it burned in 1995.
The studios are located west of Tucson, AZ beside the Tucson Mountains and the Saguaro National Park. Reconstruction has taken place over the years since the fire, however, the bell towers on the mission church were not replaced. I now have a new painting of The High Chaparral ranch setting where the TV series was filmed from 1966-1971. That can also be seen in my Collection of Southwest and Western Art, plus the Watercolor Art collection.
Old Tucson Studios was originally built in 1938 by Columbia Pictures
on a Pima County-owned site as a replica of 1860s Tucson
for the movie Arizona, starring William Holden and Jean Arthur.
Workers built more than 50 buildings in 40 days.
Many of those structures are still standing.
After Arizona completed filming, the location lay dormant for several years, until the filming of The Bells of St. Mary's (1945), starring Bing Crosby and Ingrid Bergman. Other early movies filmed on this set included The Last Round-Up (1947) with Gene Autry and Winchester '73 (1950) with James Stewart and The Last Outpost with Ronald Reagan. The 1950s saw the filming of Gunfight at the O.K. Corral (1957), The Lone Ranger and the Lost City of Gold (1958), and Cimarron (1959) among others.
The park grew building by building with each movie filmed on its dusty streets. John Wayne starred in four movies at Old Tucson Studios. Rio Bravo (1959) added a saloon, bank building and doctor's office;
McLintock! (1963) added the McLintock Hotel; El Dorado (1966) brought a renovation of the storefronts on Front Street;
and with Rio Lobo (1970) came a cantina, a granite-lined creek, a jail and a ranch house.
In 1968, a 13,000 square foot (1,208 square meter) soundstage was built to give Old Tucson Studios greater movie-making versatility. The first film to use the soundstage was Young Billy Young (1968), starring Robert Mitchum and Angie Dickinson.
The park also began adding tours, rides and shows for the entertainment of visitors, most notably gunfights staged in the "streets" by stunt performers.
Old Tucson served as an ideal location for shooting scenes for TV series like NBC's The High Chaparral (1967�1971) where the ranch house survived the 1995 fire: Little House on the Prairie, and later Father Murphy, featuring Merlin Olsen and "Petrocelli". Three Amigos was a popular comedy shot there in the 80s, utilizing the church set. From 1989 to 1992 the show The Young Riders filmed here and at the Mescal sister site. The main street appears prominently in 1990s westerns such as Tombstone.
A large print of this painting now is featured on the wall of the Los Favoritos Taco Shop in Gilbert, AZ, along with a print of my "Red Hot Peppers" painting!

Art provides an opportunity for kaleidoscopic thinking. Each time we shift the lens of our perceptions, we gain new perspectives — and new opportunities for innovation.💖❣️💖 CONGRATULATIONS ON YOUR RECENT SALE OF A WONDERFUL WORK!

Congratulations on your Sale Marilyn!...F/L

Marilyn, congratulations on your sale of this amazing painting!

Congratulations on your new sale Marilyn!

Marilyn, congratulations on your sale!

Beautiful lighting, and the birds flying overhead are a nice finishing touch. Like/f

Congratulations on your new sale Marilyn!

Congratulations on your sale! :)

Thanks so much, Stefano!

Marilyn, will the wood print of the Old Tuscan mission be ok outdoors on my stucco wall if I take inside when it rains? I live in Indian Wells, CA which is desert, and hardly get any rain. I originally wanted the metal art of this print, but I believe the wood image would look more natural in my setting. I like the "dry" look of the desert. Please advise. Also, the metal art description does not say if it comes with an attached ring for hanging. Please also advise. Thank you.

Patricia, I think the wood could be a good choice. The color will be softer and not as intense so it would be a natural look. The metal prints have a wooden frame mounted on the back for hanging. The colors are very bright and true to the original painting. It sounds like you are leaning toward the wood print. I think it would be fine outside. You can email me on my profile page too.

This is beautiful Marilyn, congrats on your sale FAV

Thanks so much to the buyer in Gilbert, Arizona, for purchasing a framed print! Enjoy!

Many thanks to the buyer in Rock Springs, WY for purchasing a print of Old Tucson plus one of Don't Fence Me In!

Many thanks to the customer in Florissant, CO for your order of 3 prints including Old Tucson, From This Earth and Old Adobe Cottage!