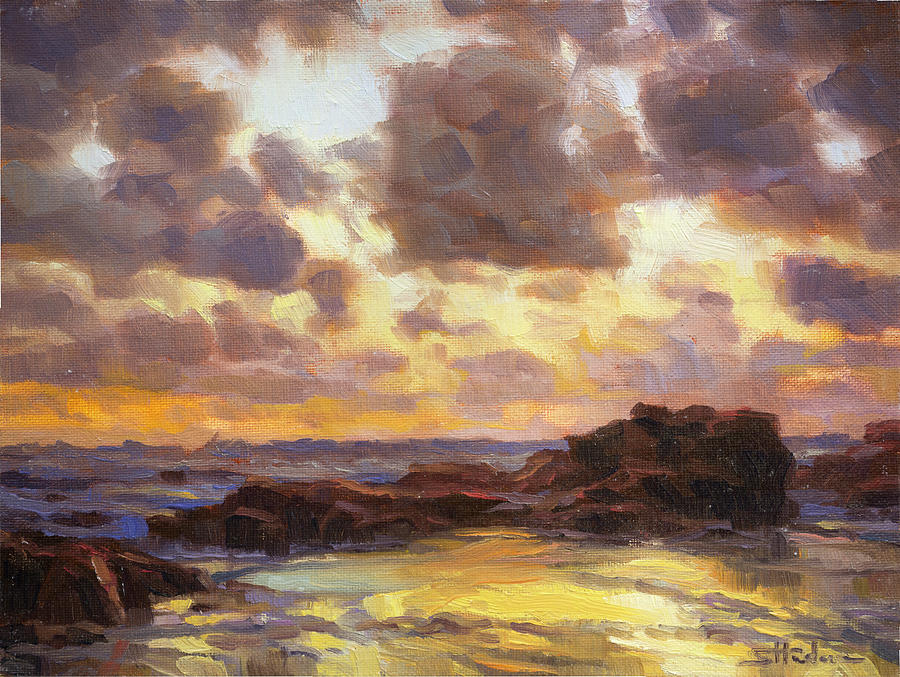 Pacific Clouds is a painting by Steve Henderson which was uploaded on April 13th, 2017.

Copper and gold reflect in a stormy sunset on the coast.... more

Copper and gold reflect in a stormy sunset on the coast.

It is a world of sepia tones, a world where the deep, almost espresso brown of the ocean rocks blend with the warm, copper tones of the sky. Clouds heavily laden with rain loom overhead, and the color from the sky reflects into the sea’s water below.

One is reminded of the folk tale, The Fisherman and His Wife, in which the fisherman returns, again and again, to ask favors from the magic fish in the sea, the one who has the power to grant wishes. Every time the fisherman returns, he asks – because his wife told him to – for a greater and greater thing, and each time he arrives, the sea is darker, stormier, more menacing.

The sea at this point is not at the point of storm, but if we were in the story, we would find ourselves midway through the fisherman’s adventure, in which his wife demands a castle and many servants.

Standing on the beach, at the edge of the surf, one is mesmerized by the movement of the clouds, the roiling of the sea, the surf crashing against the rocks: it is a scene of constant movement, constant change, constant shifting of colors and shapes and perspective.

Pacific Clouds, the artwork, invites the viewer to step into the seascape and stand at the beach’s edge, staring out into the horizon and up at the briskly moving clouds. A gust of wind to the side unsettles us on our feet, but if we’ve taken off our shoes and socks (which is the thing to do on the beach, even on the gustiest day), then we simply wriggle our toes into the sand and stand firm, knowing that we are safe as long as we are far out of the way of the waves.

Lovely light on the water :)

nice sunset colors in this seascape!

An incredible and expressive work, amazing!

your clouds are sublime, Steve. love this scenery

I do enjoy the challenge of clouds. Thank you, Chance.

Not sure if I enjoy the image or the accompanying commentary more! Both are wonderful, Steve.

What a magical work! Filled with meanings, loved your description!

The challenge of a seaman’s chosen life. Beautiful !

Glorious painting with the divine beauty of Nature + L f