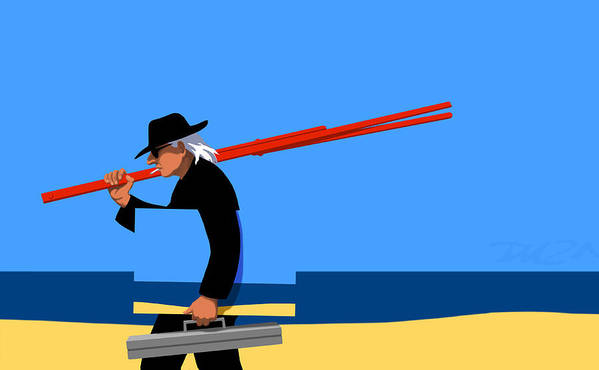 Painter poster by Tom Dickson.   Our posters are produced on acid-free papers using archival inks to guarantee that they last a lifetime without fading or loss of color. All posters include a 1" white border around the image to allow for future framing and matting, if desired.

I love it! Congratulations!

Congrats on your Sale! Well done!

thanks, all, for your comments ... I appreciate them

Photo was received in a timely manner, in good shape. No complaints

This is the second piece of work I have purchased from Fineartamerica. I couldn’t be more pleased! I do not have it framed yet. The quality of paper is very good. The dynamic, vibrant color is wonderful. I will continue to purchase from this company and probably more from this artist.

Nice product. a bit pricey though for its size, and the clarity could be better.

Package was dented upon arrival (FedX), which created a small crease in the left white boundary. I had it mounted with a wider mat border to hide the crease. The dog is a "dead ringer" of my daughter's dog, who is advanced in years.

I was a creative kid but didn’t think to pursue it and, upon graduating from high school, followed the path of least resistance from mail clerking at an ad agency to managing the HR Department of a mid-sized investment dealer, where, after eight years, I decided to take a run at doing as I pleased. Early on, this was writing, later, illustrating. I still do both, though am acknowledged most for my illustrations, reproductions of which have appeared in Canadian and U.S. publications, been chosen for Apple iCards, and are hung for fun on walls around the world. Two have been featured on Fine Art America's home page—'little black dress' and, more recently, 'painter'. Visit my website, dkzn/dickson, at dkzn.net