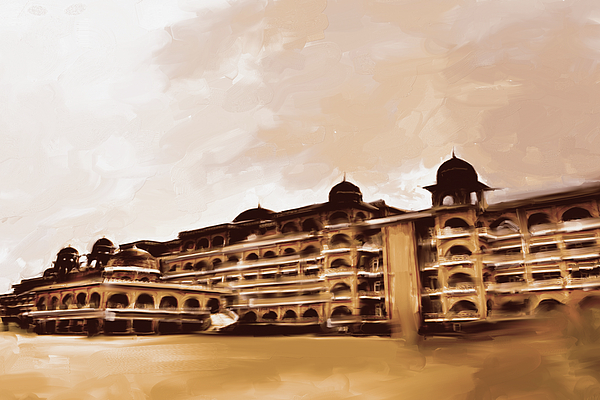 Queen duvet cover (88" x 88") featuring the image "Painting 797 3 Peshawar University" by Mawra Tahreem. Our soft microfiber duvet covers are hand sewn and include a hidden zipper for easy washing and assembly. Your selected image is printed on the top surface with a soft white surface underneath. All duvet covers are machine washable with cold water and a mild detergent.

Really wonderful. Easy to set up duvet. Colors weren't as bright but was still very beautiful. My guest loved it.

Produce is very nice, very good quality and I would have been perfectly happy EXCEPT I was sent the wrong size - I ordered twin size and was sent double size.

Very disappointed that the cover has a large flaw in the material. I sent a message the day it arrived and nobody contacted me. I am attaching a photo. Hope someone will get back to me on what I need to do. Terry Chacon

Turned out beautifully. A serene picture upon soft satin-like cotton duvet cover. The colours of sunset lend such calm and comfort going to bed just as i hoped the picture would. Wonderful!

Synthia Saint James art is why I bought this duvet. The quality of the duvet is GREAT. I have recommended this to others. It’s my favorite duvet to date. I love all the color in the print. The art is WE THE PEOPLE. I love love love this art.

In this painting, I have painted the architecture of Peshawar University. The University of Peshawar, is a public research university located in Peshawar, Khyber-Pakhtunkhwa, Pakistan.The university is one of the oldest universities in Pakistan, and is ranked as one of the highest rated universities in the country. In its inaugural year it had an enrollment of 129, of whom one was a female. The university was founded as an expansion of the Islamia College. The founder of Pakistan, Muhammad Ali Jinnah, who had visited the college in 1928 had great admiration for it, referring to it as ‘my college’ and adopted it as one of the three heirs to his fortune, along with Aligarh University and Sindh Madrassa (his own school) in 1939. For Jinnah the university was a gift to students of the province, in recognition of the part played by them in the making of Pakistan, and how it was the Pashtuns who had fought the Indians and captured Azad Kashmir.