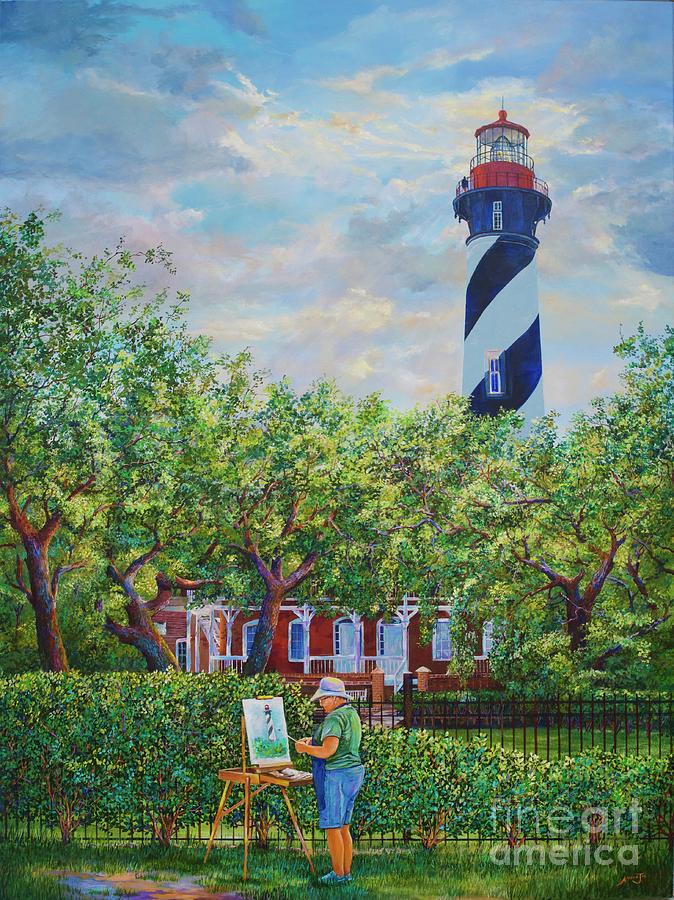 Painting The Light is a painting by AnnaJo Vahle which was uploaded on July 1st, 2018.

We had a great afternoon visiting the beautiful old St. Augustine Lighthouse recently. We toured the nicely groomed grounds around the lighthouse... more

We had a great afternoon visiting the beautiful old St. Augustine Lighthouse recently. We toured the nicely groomed grounds around the lighthouse and buildings. It was growing late in the day. We were excited to see the sun setting right behind the lighthouse. It almost looked as if the light was on. Actually, it was the setting sun immediately behind the light that was glowing. It caused all kinds of interesting sparkling effects that I wanted to depict in my painting. I included a person standing up near the top by the light to add a sense3 of scale. Always looking for an interesting foreground, I was delighted to meet a fellow artist doing a plein air painting of the lighthouse. I asked her if I may include her in my painting. She told me that she was competing in a plein air painting competition that afternoon and was thrilled that I would include her in my own painting.

I took liberties with the actual colors since I wanted it to be colorful and not exactly realistic.


The Lighthouse is St. Augustine's oldest surviving brick structure, and today, the site is restored to colors and materials used the year 1888. In 1876, a brick light keeper's house was added to the property, a triplex that held two families and a young, single, 2nd assistant keeper, most often of Menorcan descent. Brick summer kitchens were added in 1886. In 1910 10,000 tourists visited the property. During World War II armed Coastguardsmen stood guard atop the tower, fixed jeeps in the 1836 garage and lived in a small barracks building. Light keepers' and their assistants lived and worked at the Light Station until the tower was automated in 1955. After that time Lamplighters lived off site, but also took over maintaining the buoys in the harbor.

The St. Augustine Lighthouse rises 165 feet above sea level and contains 219 steps that are climbed by visitors. At the top, the original, first order Fresnel lens still serves the beacon, but today is lit by a 1000 watt bulb, and maintained by the museum and volunteers. The St. Augustine lens consists of 370 hand-cut glass prisms arranged in a beehive shape towering twelve feet tall and six feet in diameter.

This is Lovely! Congrats on your feature in the Group - Promote our Art.

Congratulations!!! Your beautiful artwork has been featured on the Homepage of the group: Lyrical Trees - Vibrant Wavelength Of Color!

Congratulations on being recognized for "Administrator Choice with the Old Masters-Painters and Traditional Arts Group!" Love the composition, color and details! vf mm

What an original POV! L/F

Makes me want visit! Almost puts me right there!

Thank you, James. It is a lovely lighthouse.

CONGRATULATIONS, AnnaJo! This is my Administractor's Choice of the Week in the fine art group, Old MASTERS--Painters and Traditional Arts! Excellent work in all aspects for the creative whole! v/f/feature, pin, tw, fb promotion!!

Congratulations AnnaJo, your outstanding artwork has been featured on the leading page of “Impressionism” group! Feel free to add it to the featured art archive and the catalogs in the group’s discussions. Excellent work! Lori

Thank you very much, Lori. I am honored.

Thank you, David. I am honored.

Love everything about this painting! LF

Thank you very much, Karen.