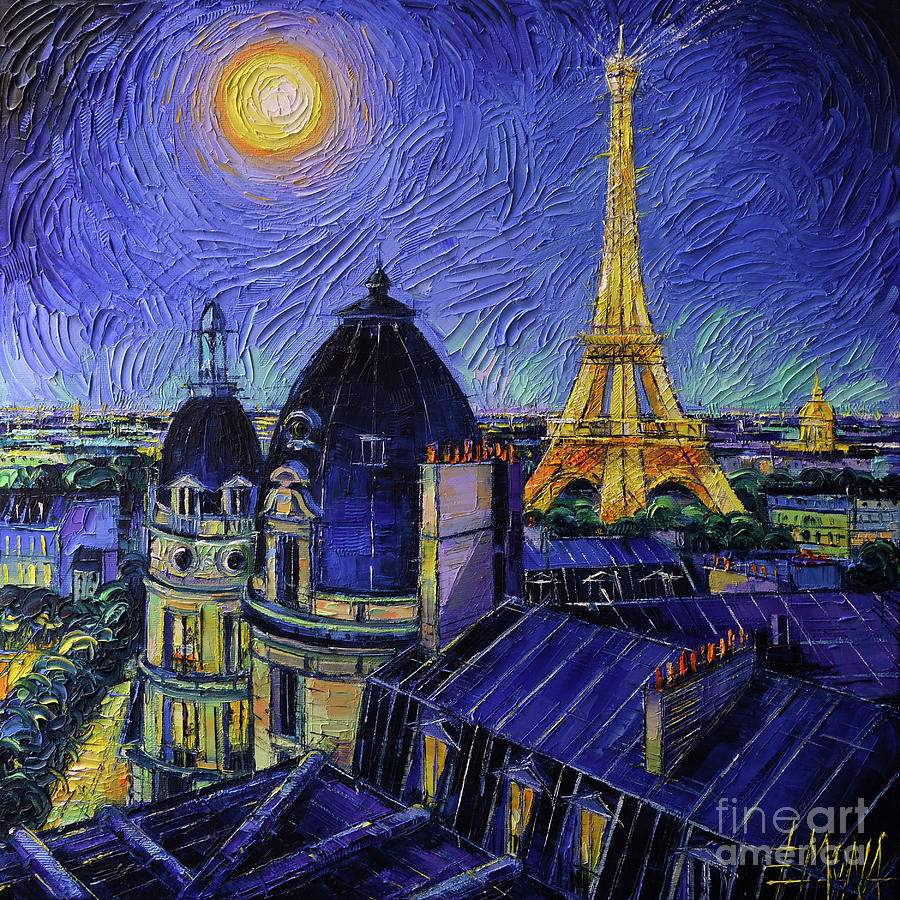 "Paris Rooftops in moonlight" by Mona Edulesco
Modern impressionist impasto palette knives oil painting on stretched canvas 50x50cm (20x20 inches), 2020.
Inspired by the beautiful photos of Carina and Ludovic, two talented photographers from Paris. You can check their Paris photos on the Instagram accounts @carina_ta_legao and @ludovicstrl
---------------------------
This work is part of my new series of paintings depicting the fascinating rooftops of Paris.
---------------------------
Paris is the capital of France and the country`s largest city. It is situated on the river Seine, in northern France, at the heart of the Ile-de-France region. The City of Paris, within its limits largely unchanged since 1860 is today one of the world`s leading business and cultural centres, and its influence in politics, education, entertainment, media, fashion, science and the arts all contribute to its status as one of the world`s major global cities. Paris is one of the most popular tourist destinations in the world, with over 30 million foreign visitors per year. There are numerous iconic landmarks among its many attractions, along with world-famous institutions and popular parks.
Paris is a city to discover, seeing the sights, visiting the museums, they're part of the experience. But then jump on the metro or a bus and get off at a place you've never heard of, wander through a quartier where French mixes with Arabic or Vietnamese, have lunch in a local restaurant, poke your head into mysterious shops, or just perch on a cafe terrace with a vin blanc and let yourself fall in love with the city.
--------------------------
The original painting has sold to a collector from Sydney, Australia. Prints available for sale.

Congratulations on your well deserved sale.

Mona, wonderful painting and the darks are so vibrant and make everything lighter stunning! :-) Maggie

Nominating this beautiful painting for a special feature in the 1000 Views group! l/f

One of your peers nominated this image in the 1000 views Groups nominated images by your fellow artist in the Special Features #16 promotion discussion. Please visit and pass on the love to another artist.....L/F/Tw

This one is just spectacular Mona, so dramatic, perfectly composed and wonderfully executed!

Magnificent painting here, love the colors, your painterly approach is so alluring , fresh and vital FAV

Congratulations!! This beautiful image has been selected to be featured for the week in the “Shadow Silhouettes and Reflections Outdoors” Group Home Page. You are welcome to add a preview of this featured image to the group’s discussion post titled “2020 June: Stunning Group Featured Images and Thank-you’s” for a permanent display within the group, to share this achievement with others. You are also welcome to share your featured image on our new Facebook page: https://www.facebook.com/groups/247552766180931/ Thank you for your participation in the group! (June 30, 2020)

THANK YOU to the buyer from Greensboro, NC - United States for purchasing a throw pillow of this painting of mine! Enjoy it!

What a wonderful vibrant piece!

This is so beautiful, and the light is magical!

This is delightful, beautifully composed and superb color scheme. LF!

Thank you so much, Robyn!

Thank you so much, Georgia!

Congratulations your outstanding artwork has been featured on the leading page of “Impressionism” group! Feel free to add it to the featured art archive and the catalogs in the group’s discussions. Excellent work! Lori

Thank you so much for featuring my "Paris Rooftops in Moonlight", Lori! :)

I love the atmosphere and light and colors! Gorgeous work Mona!