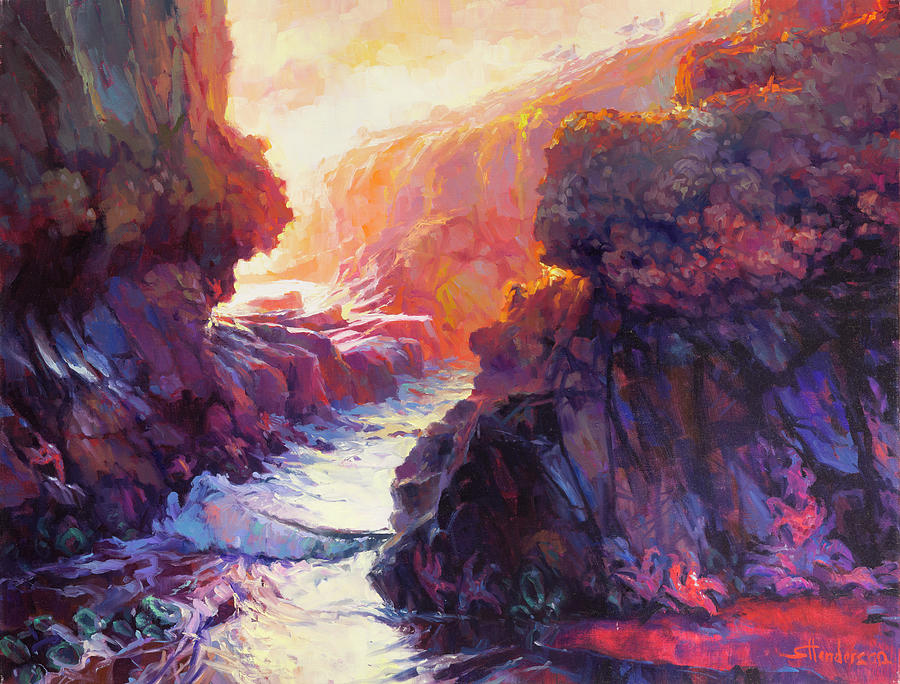 Passage is a painting by Steve Henderson which was uploaded on April 13th, 2017.

The Oregon Coast is a rugged place, filled with rocks and cliffs and crevices, especially along its central coast. Rocky outcrops in the ocean beckon... more

The Oregon Coast is a rugged place, filled with rocks and cliffs and crevices, especially along its central coast. Rocky outcrops in the ocean beckon the sea birds and sometimes the sea lions, but when the tide is up, the slippery rocks of the coast are no place to be.

But the tide goes down as well, two times a day, and on an especially low tide, the water recedes to reveal a completely different coastal world, one that is living and going about its business all the time, but one that we do not see until the water goes down far enough so that we can enter to explore.

Passage is one such place, a series of rocks that are totally surrounded by the surf one moment, then, some four to six hours later, are exposed for all to see: there are starfish and sea anemones, small crabs and villages of mussels, seaweed and kelp.

The artwork, Passage, captures this world in the midst of an incoming wave: not a few seconds before, the sand leading through the rocks was totally exposed, and an unwary explorer would think that he or she could safely wander through, free from getting wet from the waves.

Because this is low tide, the incoming wave swirls its way through the jagged rocks and quickly recedes, to leave the passageway open for exploration for several minutes, before another wave of size surges its way through.

Passage reminds us that it is wise to respect nature and not feel too arrogant when we are around her. Wise is the person who remembers to never turn his or her back to the sea, maintaining a sense of respect toward a body of water that is majestic in proportion, unexpected in behavior, and beautiful yet potentially dangerous.

Featured on 42 Fine Art America groups, including The Top 50 Features.

To the buyer from the United Kingdom who purchased prints of "Queen Anne's Lace", "Passage", and "Opalescent Sea": I am very gratified that these artworks connected with you and that they will now be gracing the walls of your home. May they bring you much joy!

Blessings on your sale

Congratulations on your sale, Steve!

Wondrous~my eye was drawn into it!

Superb, those colors make it hard to look away!