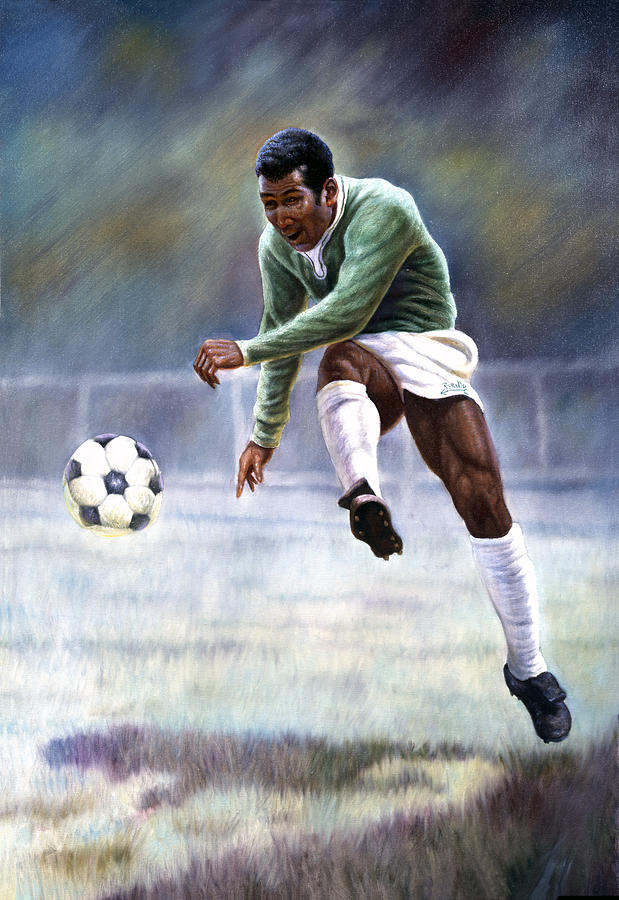 Pele is a painting by Gregory Perillo which was uploaded on August 13th, 2014.

Virtually all world-class Brazilian soccer players have nicknames. As a school boy, his class-mates began calling him �Pele�. Edison Arantes do... more

Virtually all world-class Brazilian soccer players have nicknames. As a school boy, his class-mates began calling him �Pele�. Edison Arantes do Nascimento didn�t like the name and there were a few fights in his attempt to dissuade its use, the name stuck however and, having then participated in the world�s most popular sport, Pele became arguably the most famous person on the globe. For most Americans, he�s the only soccer player we�ve ever heard of.

A soccer prodigy, Pele began playing seriously and competitively at age 10. Within five years, his father-coach sent him to the �big city� club, Santos. At age 17, he joined Brazil�s national team and became the youngest player ever to win the World Cup (1958, Brazil 5 � Sweden 2). He then promptly led Santos to two World Club Championships (1962 and 63). Plagued by injuries to Pele, Brazil came up short in the 1962 and 1966 World Cup championships. In 1970, in what has been described by many as the greatest individual performance in soccer history, Pele returned Brazil to soccer glory by winning the World Cup in Mexico.

Blessed with a brilliant strategic mind and graceful athletic elegance, Pele revolutionized �football� with an attacking style. Also, he had a wonderfully joyful, flamboyant personality which made him the master showman of the sport. For the United States, a country with a fledging, struggling professional soccer league, Pele would be an obvious catalyst if not savior.

Thus, in 1975, at age 35, Pele ended an 18 month retirement and signed a contract 93 years at 4.5 million dollars) to play for the New York Cosmos of the North American Soccer League. His mission as to introduce, teach and promote the sport in soccer�s final frontier, the U.S.A immediately, soccer attendance increased from 7500 to 75,000 per event. Games were sold-out in virtually every big city. For at least a couple years after he again retired, the �Pele dividend� kept the NASL afloat. Currently, outdoor professional soccer has returned to the status of a marginal entity in the United States. Indoor professional soccer has a rabid core of supporters and remains economically viable.

Pele�s most profound influence in the United States has been at the grassroots level. Studies show that children under the age of twelve consider soccer to be their second favorite sport trailing only basketball. Youth leagues have sprouted in almost every town of every state. These future athletes will one day successfully compete against the finest teams of Europe and South America. When this happens, soccer will take its rightful place as a popular, healthy alternative to the big three � basketball, football and baseball.