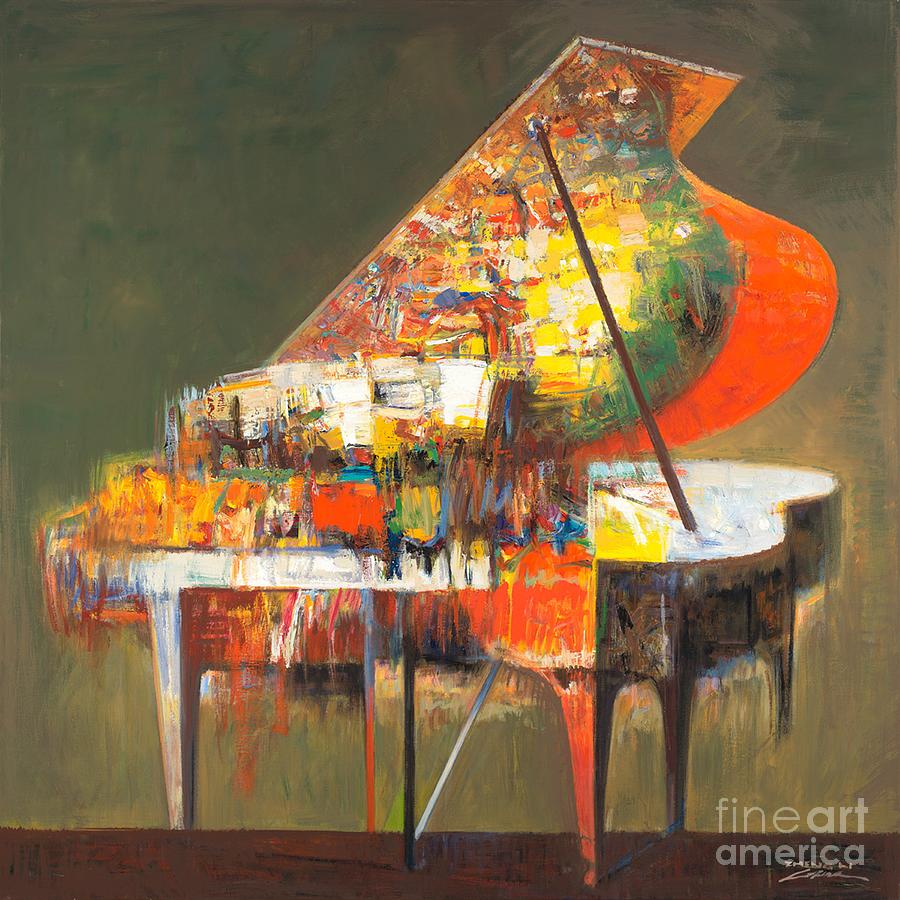 piano No.22-Classical music is a painting by Zheng Li which was uploaded on December 7th, 2014.

After spending seven years back in his native China, artist Zheng Li returned to Georgia to resume his career. To get a sense of what was selling, Li strolled into an art gallery and was shocked: A reproduction very similar to his most popular work was prominently displayed.

Livid and confused, he found the gallery��s manager. ��Who��s the artist?�� he demanded.


Bita Honarvar
Nov. 7, 2012 Roswell -- Chinese-born artist Zheng Li, shown here in his studio at his Roswell home Wednesday, Nov. 7. 2012, is suing a couple dozen retailers in federal court, including J.C. Penney, Kohl��s and Z Gallerie, accusing them of copyright infringement for selling art based on his paintings. BITA HONARVAR / BHONARVAR@AJC.COM
��No, that��s my painting,�� Li told him. Li balled his hands into fists in recollection of the memory. ��It made me mad, very, very mad.��

Li went home to Roswell and researched ��Piano Coloratura,�� the painting that closely resembled his ��Piano No. 9.�� Li painted his version in 2004 and then featured it that year on the cover of a book he published.

On the Internet, Li found site after site �� nearly 100 in all, he said �� selling ��Piano Coloratura.�� Li contacted a lawyer, who discovered the ��P. Robert�� painting was copyrighted in 2010 by Somerset Studios, a North Carolina company that sells art to retailers.


HANDOUT
Atlanta area painter Zheng Li has filed suit against numerous art wholesalers and retailers claiming that a work entitled Piano Coloratura, right, is a knockoff of his painting, Piano No. 9.
Li, 50, who came to the U.S. two decades ago to teach at Appalachian State University, is one of an increasing number of artists who may be getting his work digitally ripped off, licensing experts say. But those experts say the scale of the alleged ripoff in this case may be much larger and more brazen than usual.

The suit alleges a ��classic case of intellectual property theft. Defendants have willfully and blatantly expropriated, mass-produced, distributed, marketed, sold and continue to sell for profit through various distribution channels knock-off prints and posters of the established artist Zheng Li��s original Piano No. 9.��

The lawsuit also adds a dash of art criticism. ��The brushwork and colors were a messy and incompetent imitation of Zheng Li��s original Piano No. 9,�� the lawsuit states, ��but the underlying visual image was an exact duplicate.��

In an interview, John Bowler, Li��s attorney, figures someone scanned a digital image of his client��s work and ��then did a paint-by-numbers job and is mass selling it.��

Somerset Studios�� attorney said he could not comment. Neither of the other defendants�� attorneys returned numerous phone calls.

Christopher Sprigman, a professor at the University of Virginia Law School, viewed photos of the two works and called the case ��close to the line.��

He said the subject of the painting �� the piano �� as well as the angle of the piano, the colors and the style have similarities. But each of those cannot be copyrighted. The work as a whole, however, can be.

It��s a difficult case, he said, because one work of art influences others.

Bowler and Li said the alleged copying dilutes the market for the original artist��s work and devalues it. The ��Coloratura�� version is so prevalent, Li said, that people will be confused and mix up the works. That will hurt sales, for both his prints and originals, he said.

Li said he blossomed as an artist after moving to the U.S. in 1991. He was classically trained in China and taught to be ��very precise�� in his style.

He moved to Atlanta the next year and later opened a couple of galleries that sold his artwork. In 2005, he returned to China and closed the galleries. Li found that Beijing is a good place to sell art, but Georgia offers a better quality of life, so the married father of two moved back to Roswell this year.

After discovering the alleged copies of his work, Li tried to track down artist P. Roberts. Neither he, nor Bowler have found him.

��There is no P. Roberts,�� Li claimed. The suit contends: ��Upon information and belief, ��P. Roberts�� is a fictitious name and there is, in fact, no person named P. Roberts or using the pseudonym ��P Roberts.�� ��

The copyright obtained in 2010 by Somerset �� according to the U.S. Copyright Office it is the only one the company owns �� doesn��t mention a ��P. Roberts�� and simply states the company is copyrighting a work for hire created in 2008.

Li just registered his painting with the Copyright Office this August.

The problem, said Theodore Feder, president of the Artists Rights Society, is Li did not register his work before he discovered the alleged copying. He said Li can prove that he created his work first, but because it wasn��t registered first, it may cut down on the amount of damages he can receive.

��That��s what screws up a lot of artists, they are not businessmen,�� said Feder.

Robert Panzer, executive director of VAGA, an organization that protects copyrights for visual artists, said the burden of proof in a copyright infringement case now rests on Li, rather than Somerset.

Panzer said digital and other copying of works happens frequently, although usually on a much smaller scale.

VAGA represents the late artist Grant Wood, who painted the famous ��American Gothic.�� He said the work is often copied and parodied. ��In fact, it��s almost a cottage industry making fun of it.��

��But if you start making copies of it, posters of it or making money on it, then our ears go up,�� he said. ��If someone takes something not famous and makes money on it, it��s almost worse. They are taking his work and potential income.��

Whether someone is taking a general idea and then performing his or her own work (OK) or is simply stealing something (not OK) is the question at the heart of the matter here. ��To determine if this is a copy, the average Joe on the street is a better judge than the experts,�� said Panzer.

He said the defendants would argue ��you don��t own color and the spacialization of color. ��I took an idea but ideas aren��t copyrighted.�� The original artist will say, ��Forget the colors. Look at the piano, the scale, the angle, the position of the legs.�� ��

Panzer then added, ��If I��m a person on the street, I��d say (the second artist) was looking at this thing when he did this.��

��Many artists are ripped off in hundreds of small ways, where no particular way is worth pursuing,�� said Panzer. But, he said, Li may be lucky. Panzer thinks the deep pockets of the defendants, plus the fact they may have made good money off of Li-inspired art, is worth pursuing.

During a visit to his home recently, Li was busy painting in his garage. His subject? Another piano.