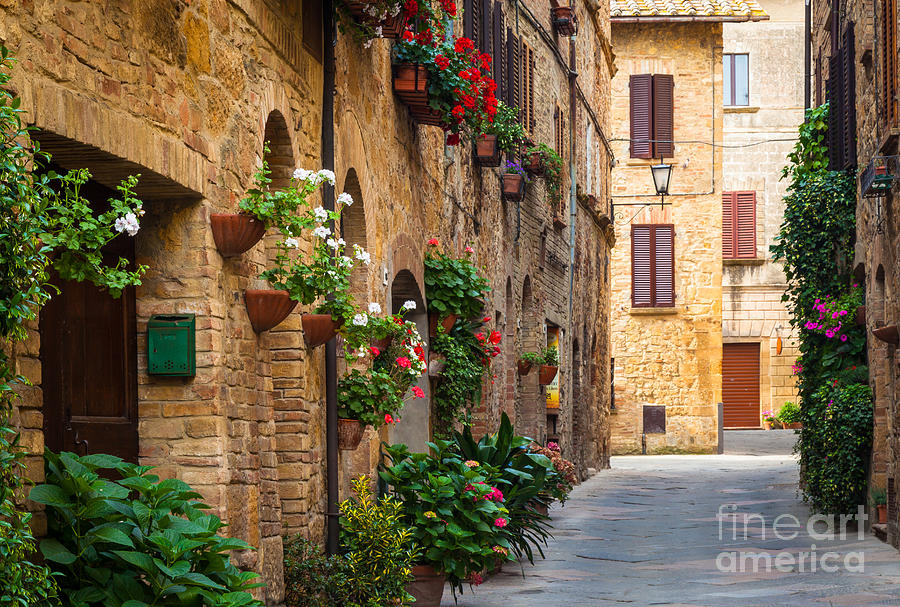 Pienza Street is a photograph by Inge Johnsson which was uploaded on May 17th, 2014.

Pienza, a town and comune in the province of Siena, in the Val d'Orcia in Tuscany (central Italy), between the towns of Montepulciano and Montalcino,... more

Pienza, a town and comune in the province of Siena, in the Val d'Orcia in Tuscany (central Italy), between the towns of Montepulciano and Montalcino, is the "touchstone of Renaissance urbanism." In 1996, UNESCO declared the town a World Heritage Site, and in 2004 the entire valley, the Val d'Orcia, was included on the list of UNESCO's World Cultural Landscapes.Pienza was rebuilt from a village called Corsignano, which was the birthplace (1405) of Aeneas Silvius Piccolomini, a Renaissance humanist born into an exiled Sienese family, who later became Pope Pius II. Once he became Pope, Piccolomini had the entire village rebuilt as an ideal Renaissance town. Intended as a retreat from Rome, it represents the first application of humanist urban planning concepts, creating an impetus for planning that was adopted in other Italian towns and cities and eventually spread to other European centers. The rebuilding was done by Florentine architect Bernardo Gambarelli (known as Bernardo Rossellino) who may have worked with the humanist and architect Leon Battista Alberti, though there are no documents to prove it for sure. Alberti was in the employ of the Papal Curia at the time and served as an advisor to Pius. Construction started about 1459. Pope Pius II consecrated the Duomo on August 29, 1462, during his long summer visit. He included a detailed description of the structures in his Commentaries, written during the last two years of his life.

Beautiful!!!! Congratulation on your sale. L/F

Congratulations on your sale, Inge!

💖💖💖 Congratulations on your recent sale of this amazing Work!

Congratulations on your new sale Inge, nice one!

Such a beautiful picture!

Congratulations!! This stunning image has been selected to be featured for the week in the “Art for Ever with You” Group Home Page. You are welcome to add a preview of this featured image to the group’s discussion post titled “2019 September: Stunning Group Featured Images and Thank-you’s” for a permanent display within the group, to share this achievement with others. Also feel free to post your feature on our group Facebook page: https://www.facebook.com/groups/296998814248643/ Thank you for your participation in the group! ~Jan (September 30, 2019)

Congratulations! Your fantastic photographic art has been chosen as a Camera Art Group feature! You are invited to archive your work in the Features Archive discussion as well as any other discussion in which it would fit!

Congratulations - Your beautiful artwork has been featured in the "Travel Art" group! For further promotion, you can post it to the specific Travel Destinations galleries, our Facebook group and our Pinterest board - all the links are provided on our group's homepage: https://fineartamerica.com/groups/1-travel-art.html * You are also invited to post it to our group's blog: travelartpix.com for worldwide exposure!

Congratulations your wonderful work is now featured on Artist Salon 1! Please add your work to our Discussion archive for features.

CONGRATULATIONS! It is my great pleasure to FEATURE your exceptional artwork on the homepage of the Artist Group No Place Like Home, 7/30/2019! You are invited to post it in the Group's Features Discussion thread for posterity or any other thread that fits!

Congratulations Inge, your work is Featured in "Photographic Camera Art" I invite you to place it in the group's "2019 Featured Image Archive" Discussion!! L/Tweet!

So beautiful and full of atmosphere LF

So beautiful and full of atmosphere LF

Beautiful! Congrats on your sale!