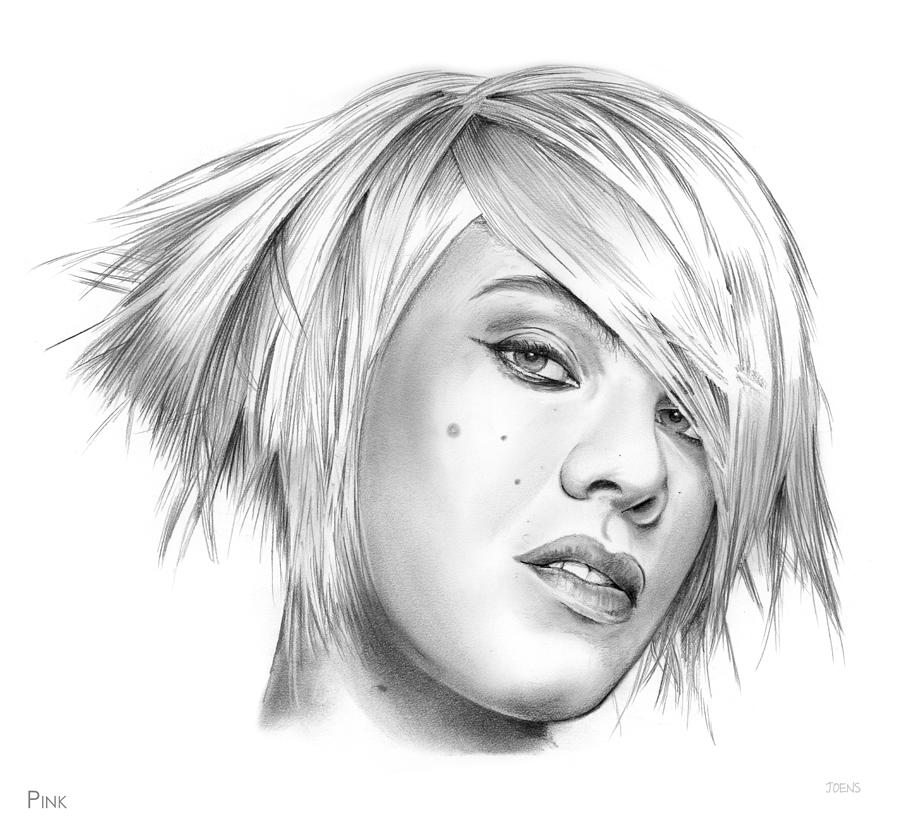 Pink is a drawing by Greg Joens which was uploaded on December 26th, 2015.

Alecia Beth Pink Moore (born September 8, 1979) (stylized as P!nk) is an American singer and songwriter. Originally a member of the girl group... more

Alecia Beth "Pink" Moore (born September 8, 1979) (stylized as P!nk) is an American singer and songwriter. Originally a member of the girl group Choice, Pink rose to fame as an R&B artist with her debut solo album, Can't Take Me Home (2000). The album was certified double platinum in the United States and spawned two Billboard Hot 100 top-ten hits, "There You Go" and "Most Girls". She gained further recognition with the Moulin Rouge! soundtrack "Lady Marmalade", which gave Pink her first Grammy Award as well as her first number-one single on the Billboard Hot 100. Pink took more artistic control and pursued pop rock direction for her second album, Missundaztood (2001). It sold more than 15 million copies worldwide and yielded three U.S. top-ten singles, "Get the Party Started", "Don't Let Me Get Me", and "Just Like a Pill".

Pink's third studio album, Try This (2003), generated considerably lower sales, but earned her the Grammy Award for Best Female Rock Vocal Performance. Pink revived her popularity with her fourth and fifth studio albums, I'm Not Dead (2006) and Funhouse (2008), with the latter containing her second U.S. number-one hit, "So What". Pink concluded the first decade of her career with the compilation album Greatest Hits... So Far!!! (2010), which featured Fuckin' Perfect and the chart-topping single "Raise Your Glass". Her sixth studio album, The Truth About Love (2012), debuted at number one on the Billboard 200 and spawned the top-ten singles "Blow Me (One Last Kiss)", "Try", and "Just Give Me a Reason", with the latter becoming her fourth U.S. number-one single. In 2014, Pink recorded a collaborative album, rose ave., with Canadian musician Dallas Green under a folk music duo named You+Me.

Noted for having "a strong signature voice and a literally acrobatic ability on stage", Pink has received mostly positive reception from music critics. She has sold over 136 million records worldwide. She has sold over 16 million albums in the United States. Her career accolades include three Grammy Awards, a Brit Award, and six MTV Video Music Awards. In 2009, Billboard recognized Pink as the Pop Songs Artist of the Decade. Pink was also the second most-played female solo artist in the United Kingdom during the 2000s decade, behind Madonna. VH1 ranked her number 10 on their list of the 100 Greatest Women in Music, while Billboard awarded her the Woman of the Year in 2013. At the 63rd annual BMI Pop Awards, she received the BMI President's Award for "her outstanding achievement in songwriting and global impact on pop culture and the entertainment industry." Source: Wikipedia