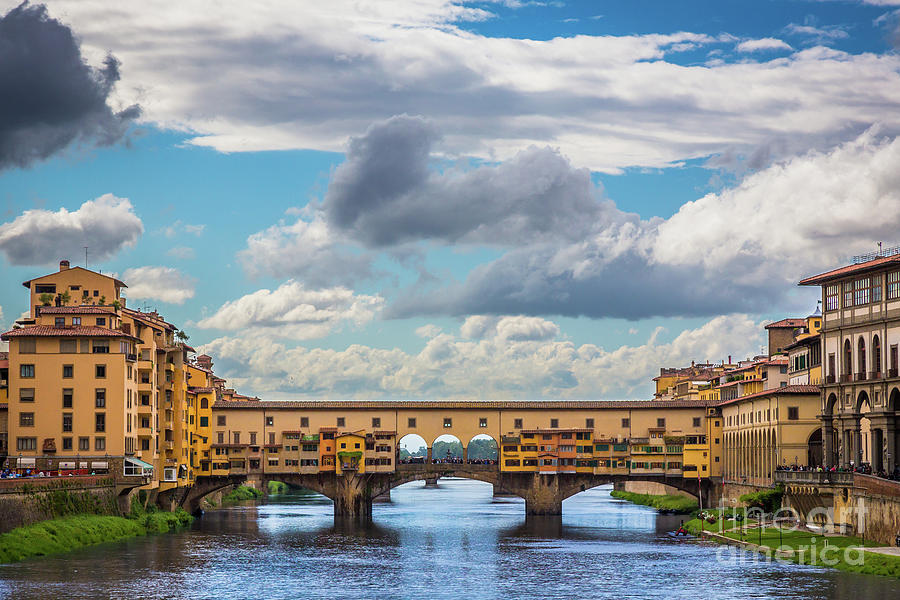 Ponte Vecchio Clouds is a photograph by Inge Johnsson which was uploaded on February 11th, 2014.

The river Arno and Ponte Vecchio bridge in Firenze (Florence), Italy.
-----
Captured with a Canon 5D Mk III camera and Canon EF 24-105/4L IS lens
-----
Florence (Italian: Firenze) is the capital city of the Italian region of Tuscany and of the province of Florence. The Ponte Vecchio ("Old Bridge") is a Medieval stone closed-spandrel segmental arch bridge over the Arno River, in Florence, Italy, noted for still having shops built along it, as was once common. Butchers initially occupied the shops; the present tenants are jewellers, art dealers and souvenir sellers. The Ponte Vecchio's two neighbouring bridges are the Ponte Santa Trinita and the Ponte alle Grazie. The bridge spans the Arno at its narrowest point where it is believed that a bridge was first built in Roman times, when the via Cassia crossed the river at this point. The Roman piers were of stone, the superstructure of wood. The bridge first appears in a document of 996. After being destroyed by a flood in 1117 it was reconstructed in stone but swept away again in 1333 save two of its central piers, as noted by Giovanni Villani in his Nuova Cronica. It was rebuilt in 1345, Giorgio Vasari recorded the tradition in his day, that attributed its design to Taddeo Gaddi, besides Giotto one of the few artistic names of the trecento still recalled two hundred years later. Modern historians present Neri di Fioravanti as a possible candidate. Sheltered in a little loggia at the central opening of the bridge is a weathered dedication stone, which once read Nel trentatre dopo il mille-trecento, il ponte cadde, per diluvio dell' acque: poi dieci anni, come al Comun piacque, rifatto fu con questo adornamento. The Torre dei Mannelli was built at the southeast corner of the bridge to defend it.
The bridge consists of three segmental arches: the main arch has a span of 30 meters the two side arches each span 27 meters.

Congratulations!! This beautiful image has been selected to be featured for the week in the “Art for Ever with You” Group Home Page. You are welcome to add a preview of this featured image to the group’s discussion post titled “2018 July: Stunning Group Featured Images and Thank-you’s” for a permanent display within the group, to share this achievement with others. If the activity is allowed, your image will also be posted to our group Google+ page. Thank you for your participation in the group! ~Jan (July 30, 2018)

Congratulations! Your fantastic photographic art has been chosen as a Camera Art! You are invited to archive your work in the Features Archive thread! group as well as any other thread in which it would fit!

Congratulations on you feature in the group Five Star Artist!

Congratulations! Your beautiful artwork has been featured on the homepage of "Travel Art" group at Fine Art America :) As a valuable artist, I invite you to be part of our group's blog I just created: travelartpix.com/ … Please read this first: travelartpix.com/why-travelartpix/ …and don't forget to promote yourself in our Pinterest group board and/or our Facebook group - links are provided on our homepage.

Congratulations! Your extraordinary work has been Featured in the Fine Art America group “The Earth Is Art”! You are invited to archive your featured image for permanent storage and for viewing on the Discussions Page in: “2018 Member's Extraordinary Features Images Archive 3.0!” theme. Simply copy your image’s Embed URL on your image’s profile page, and paste it into the Discussion Topic site: https://fineartamerica.com/groups/the-earth-is-art-.html?showmessage=true&messageid=4138611

This piece of fine artwork has earned the honor of being chosen to show off to other artists and prospective buyers here in the Wisconsin Flowers and Scenery group. It is an honor to share this piece of well composed and beautiful art on our Featured section of our homepage. Thanks much for sharing! Liked and Faved Randy B. Rosenberger (administrator of the WFS group)

Congrats on your sale, Inge!

Congratulations on your feature in Images of Europe on Fine Art America!

Inge, Your Stunning Work has been Featured on the Home Page of Weekly Fun!!!

This is outstanding Inge ...super clouds and great architecture ... L/F