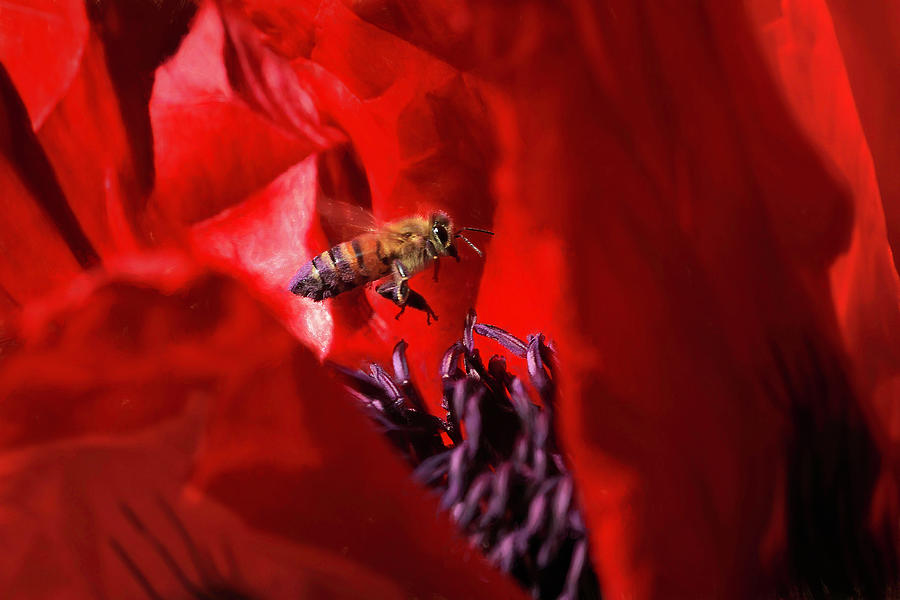 Purple Pollen is a photograph by Donna Kennedy which was uploaded on January 24th, 2020.

Honeybee (Apis mellifera) Honeybee hives have long provided humans with honey and beeswax. Such commercial uses have spawned a large beekeeping industry, though many species still occur in the wild.
All honeybees are social and cooperative insects. A hive's inhabitants are generally divided into three types. Workers are the only bees that most people ever see. These bees are females that are not sexually developed. Workers forage for food (pollen and nectar from flowers), build and protect the hive, clean, circulate air by beating their wings, and perform many other societal functions. The queen's job is simple, laying the eggs that will spawn the hive's next generation of bees. There is usually only a single queen in a hive. If the queen dies, workers will create a new queen by feeding one of the worker females a special diet of a food called "royal jelly." This elixir enables the worker to develop into a fertile queen. Queens also regulate the hive's activities by producing chemicals that guide the behavior of the other bees.
Male bees are called drones-the third class of honeybee. Several hundred drones live in each hive during the spring and summer, but they are expelled for the winter months when the hive goes into a lean survival mode.
Bees live on stored honey and pollen all winter, and cluster into a ball to conserve warmth. Larvae are fed from the stores during this season and, by spring, the hive is swarming with a new generation of bees.

Thank you to the Administrators that Featured this photo in the following Groups:
-USA Photographers ONLY
-Artist Salon 1
-Topaz Simplify-Glow-Impression Photo Renderings
-Wisconsin Flowers and Scenery
-Macro Marvels
-Just Perfect
-Images That Excite You
-Visions of Spring-Glances of Summer
-Light Marvels
-Insects Butterflies and Reptiles

Thank you so much Brian :)

Oh wow, this is so amazing!! What a picture

Awesome capture Donna! I love the fiery colors in this!! So pretty! l/f/t

Thank you John for the visit and Feature!! :)

Thank you Randy for the visit and Feature!! :)

What a fine piece of artwork and I am happy to announce that this beauty has been chosen for a feature on the homepage of our WFS group. Congratulations for this accomplishment. Well deserved!