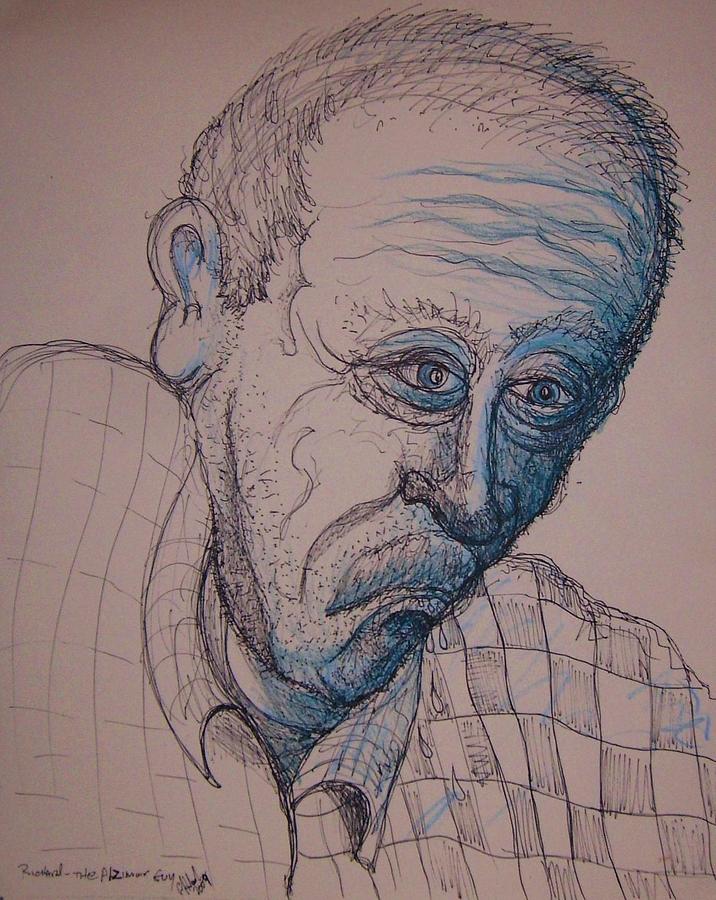 Richard is leaving is a painting by Richard Hubal which was uploaded on March 25th, 2010.

Besides being a parent of 8 kids, taking care of the 2 right now as I�m going through a divorce, and working on a series relating in regards... more

Besides being a parent of 8 kids, taking care of the 2 right now as I�m going through a divorce, and working on a series relating in regards of the soul, I also cut hair and manage a pretty successful hair salon. I also am asked to go occasionally to group homes in the past and cut folk�s hair that may have issues such as mentally unstable, autism, or stroke individuals. I have been privilege to become much more than an acquaintance and had the honor to be a pallbearer for one.

Recently I have had the privilege to cut hair at homes where theses individuals are suffering from ahlzimers disease. When I first came to the environment, it was similar to the group homes I had experienced from in the last 9 years. The homes are quite big and there are at least 4 to 5 �consumers� and usually 2 staff members to provide for these folks. I usually would cut 2 to 4 of these folks hair. It is an honor, and yes, very sad.

The one person whose sketch is showing is �Richard� and it is not hard name to remember since that is my first name also. How Richard compelled me was that I had started to cut this gentleman�s hair in his beginning stages of this disease. I could tell this man had an interesting life, which he had seen the world, had a certain manner of ethics and spirit. A sense of humor, and knows of life and nothing seem to surprise him what so ever.

Month after month, Richard�s behavior would change, but still had a way with his humor even at the end he still had somewhat of a smile. But the last time I did Richards hair, you could see that he is very sad, and he could not do anything about his physical fate. As I was cutting another �consumers� hair, Richard for some how or other fell off his wheel chair, and yelled in pain. The staff member rushed over and helped him up. He wasn�t hurt, but it was a startling surprise, like a book dropping to the floor only to wake up the baby and the baby is startled by the hard sound.

Richard passed away, and I had not known it till a couple of months later. It is not unusual that the folks who have this silent killer just slip away. I was upset and disappointed that I did not see Richard again, like a lot the folks I�ve done in the past at these group homes, they just slip away. I drew a picture of Richard. I know a lot of you out there who also have sketches, paintings or whatever medium of folks who are no longer around, gone, but their soul had touch you in such a way that you had to draw their face and why. Can you share your piece; it would be a very moving post to say the least. God Bless you all! rh

Richard will remember your good deeds in heaven. You asked to share our work. My Loradana is in a nursing home. Her husband commissioned me to paint her. He gave me a photograph to work from that included himself but only wanted her in the painting. I refused to exclude him because I knew she would have wanted him there. Sometimes the families suffer the most as they watch their loved ones slip away. Thanks for sharing Richard with us. Deb