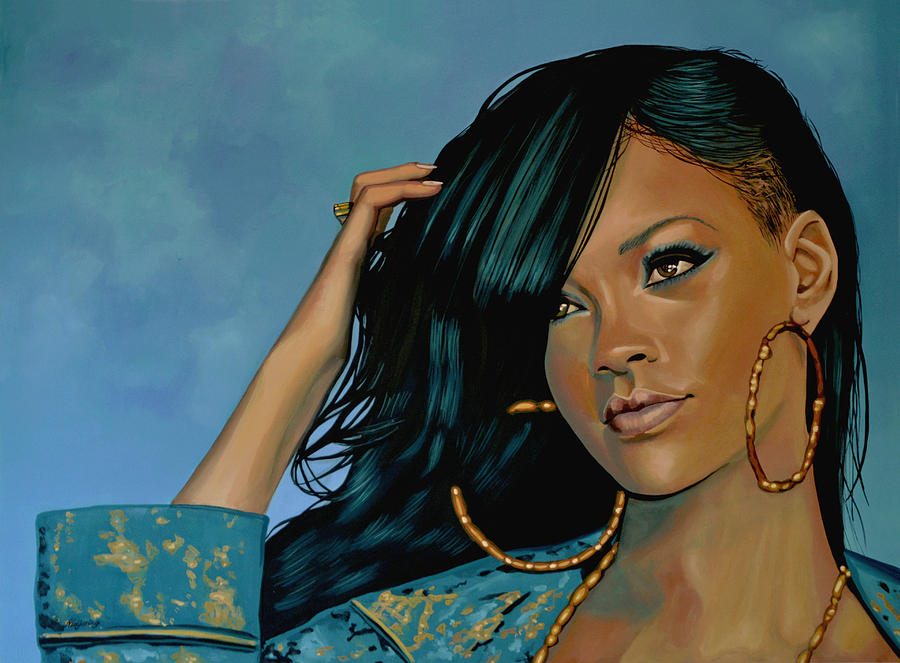 Rihanna Painting is a painting by Paul Meijering which was uploaded on October 19th, 2013.

Realistic acrylic painting of Rihanna by the Dutch fine artist Paul Meijering - The Original painting is 90 x 120 cm and for sale... more

Robyn Rihanna Fenty (born February 20, 1988) is a Barbadian singer and songwriter. Born in Saint Michael and raised in Bridgetown, she first entered the music industry by recording demo tapes under the direction of record producer Evan Rogers in 2003. She ultimately signed a recording contract with Def Jam Recordings after auditioning for its then-president, hip-hop producer and rapper Jay Z. Rihanna's first two studio albums Music of the Sun (2005) and A Girl like Me (2006) charted on the top 10 of the U.S. Billboard 200 and respectively produced the singles "Pon de Replay" and "SOS".

She assumed creative control of her third studio album Good Girl Gone Bad (2007) and became a household name following the release of its international successful lead single "Umbrella". She followed it with five Recording Industry Association of America (RIAA) platinum-certified albums, including the Grammy Award winning Unapologetic (2012) and her second Billboard 200 number-one album Anti (2016). Many of her songs rank among the world's best-selling singles of all time, including the singles "Umbrella", "Take a Bow", "Disturbia", "Only Girl (In the World)", "S&M", "We Found Love", "Diamonds", and "Stay" in which she is the lead artist, and her collaborations "Live Your Life" (with T.I.), "Love the Way You Lie" and "The Monster" (both with Eminem).

I want this Wall Art of Rhianna, but it seems to not be holding it in my favorites .

Beautiful relistic portrait. Congrats for a such lovely work!! L/F

Thank you so very much, Scott, for your compliment, support and the feature in your fantastic group!!;-))

beautifully painted! I prefer her with long hair like this! f/v

Thank you so much, Belinda, for your compliment!;-)

Thank you so much, Ella!

Beautiful painting, I love the style you have painted it in. Love it. l/v Jerry