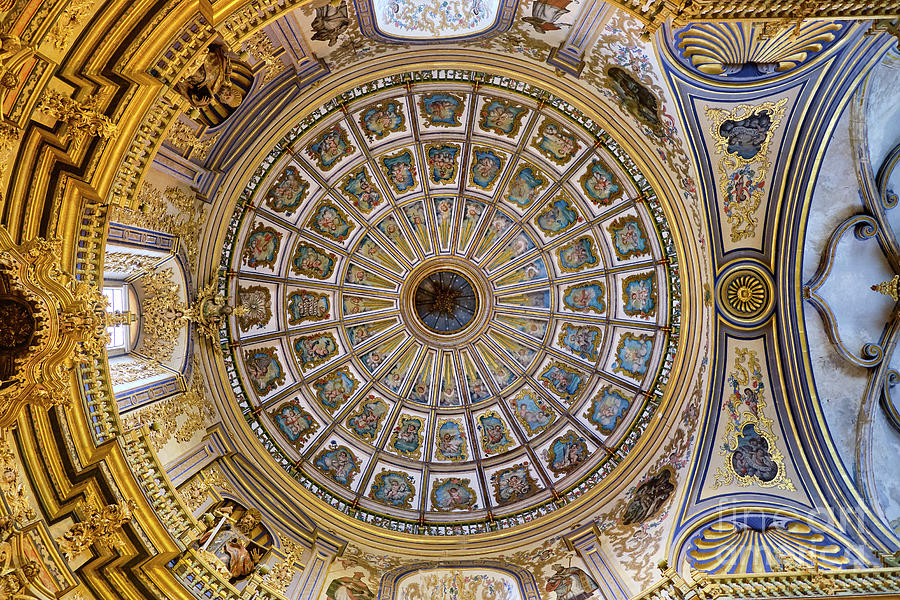 Roof. Chapel. Sacra Capilla del Salvador. Jaen. Spain. 1536
The interior was designed for the most part by Diego de Siloé as a funerary temple, with a large roundabout and an added nave, leaving the roundabout for the nobles, and the nave for the town. The main altar is presided over by a wooden altarpiece by Alonso Berruguete, which represented the Transfiguration. It was burned by the militiamen in the Civil War and only the central Christ is preserved. The restoration is by Juan Luis Vassallo.

The temple housed a repertoire of sculptures, relics, goldwork and paintings, pieces of great value acquired or given to its founder, such as the famous Piedad de Úbeda by Sebastiano del Piombo (later taken to the Casa de Pilatos in Seville and currently on loan at the Prado Museum in Madrid); a golden chalice, gift of Carlos V; a crucifix cross by Francisco Martínez of 1542; a reliquary head; a calvary by Pieter Coecke (now temporarily guarded in the Casa de Pilatos in Seville) and an ivory crucifix from the 16th century. But surely the most commented piece of the set is a statue of San Juanito sculpted in marble, which was attributed by Gómez-Moreno to Miguel Ángel; authorship that has been endorsed by later experts. Seriously damaged in 1936, the conserved fragments were sent by the Casa de Medinaceli to Florence in 1995, in order to try their reintegration; hard work completed in 2013. The restored sculpture was exhibited in Italy, and in 2015 at the Museo del Prado in Madrid.

The finely worked grating that separates roundabout and nave is by Francisco de Villalpando, cast in 1555, with two sections and three bodies, the highest and slender central one.

In the crest, there are four medallions with the Virtues and in the center the shield of the Cobos, closing it with a cross. The central vault is supported by attached Corinthian columns; on its entablature a gallery run to the one that they give tribunillas that in the embouchure of the arc take caryatids. The decoration of the vaults is more sober than the rest, trying to resemble the ribs of the Isabel style.

Sacristy
The sacristy is considered one of the main works of the Spanish Renaissance, with a rich sculptural decoration that symbolizes vices and virtues, by Esteban Jamete, on a design made entirely by Vandelvira, a precedent that he would later build in the Cathedral of Jaén. With arches that leave niches to accommodate the drawers where the curtains of the cult are kept, it is decorated with all kinds of figures, busts and corporeal allegories. The entablature is supported by caryatids that, in turn, rest on human heads. The figures that are in the spandrels of the arches are the Sibyls. In the sacristy there are remains of high choir stalls, low choir stalls, goldsmiths of great historical and artistic value, a reliquary box, tiller and cross cannon, and some paintings from different schools.


Door of the Sacristy
Highlights its original door, made in a corner, as one of the most daring and beautiful architectural solutions of Vandelvira. It is said to represent the Door of Eden. Instead of columns, there are caryatids with baskets of flowers on the head, holding a double entablature separated by grotesques, on which, under a stone canopy, is the Virgin of Peace proclaiming the harmony between power and people, personified by an emperor and a servant who kneel at his side, completing the decoration with two angels.