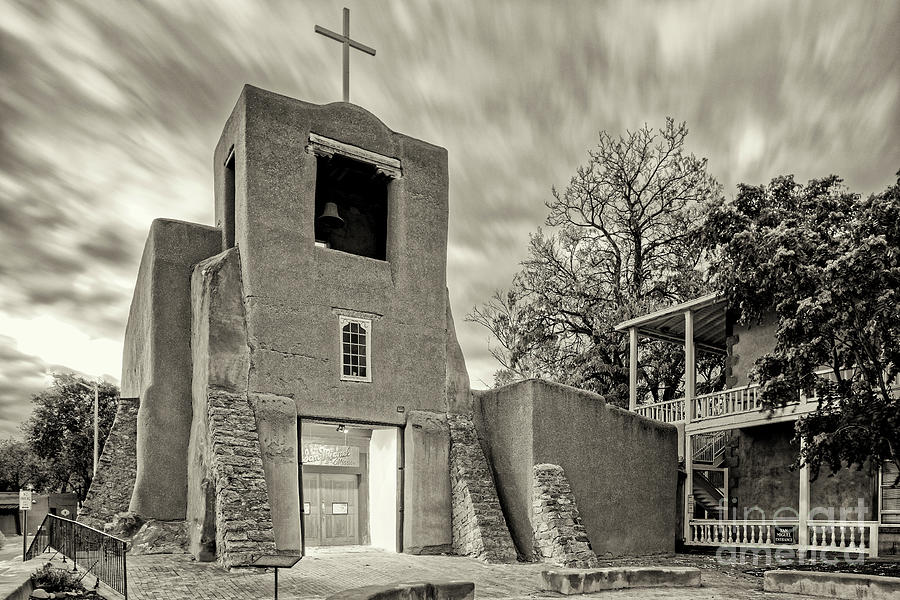 San Miguel Mission and Chapel - Santa Fe The City Different New Mexico Land of Enchantment is a photograph by Silvio Ligutti which was uploaded on October 23rd, 2018.

Behold the Oldest Church in the United States, built between 1610 and 1626.
Info taken from https://www.historicsantafe.org/san-miguel-chapel

"Known locally as ‘The Oldest Church’, San Miguel Chapel dates to the founding of Santa Fe in 1610. The oldest documented reference to San Miguel is dated July 28, 1628. This source document refers to San Miguel as a Hermitage, or military chapel. Today, San Miguel is often referred to as San Miguel Mission, or San Miguel Church. San Miguel Chapel is used in all official documents, as it reflects this oldest documented reference. Franciscans played a prominent role in the early history of San Miguel, as do the Tlaxcaltecas Indians. It is likely that these Tlaxcalan Indians built the original Chapel on this site under the directions of the Franciscans. San Miguel was partially destroyed in 1640 by Governor Luis de Rojas during a feud with the Franciscans. It was rebuilt soon after, and continued to be used by the artisans, craftsmen, and servants who made their homes in the Barrio de Analco. The Tlaxcalan word ’Analco’ means “the other side of the river”, which was an accurate description of this barrio, and its working class residents.

During the Pueblo Revolt in 1680, the residents of the barrio took refuge in San Miguel. The roof was set ablaze, and the Chapel was destroyed. It lay in ruin until the Reconquest of Santa Fe in 1693 by Don Diego de Vargas. One of de Vargas first proclamations upon his return to Santa Fe was to rebuild San Miguel Chapel. The building we see today dates to the completion of that restoration in 1710.