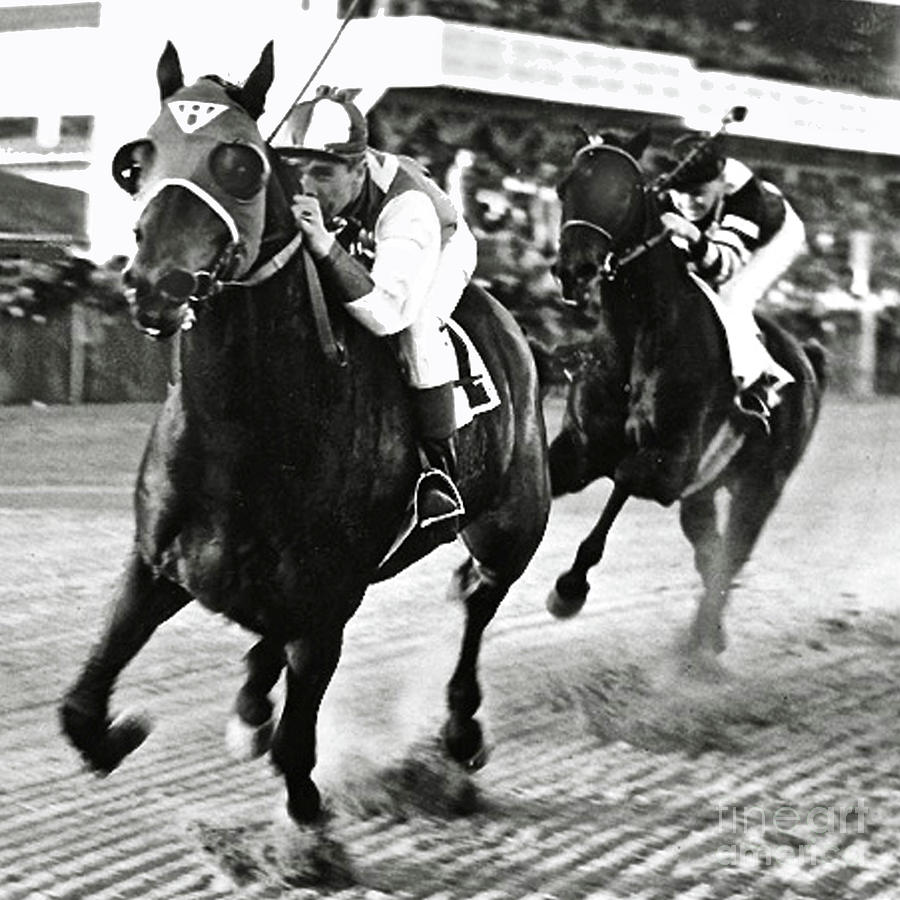 Seabiscuit and George Woolf lead War Admiral and Jockey Charles Kursinger in the first turn, Pimlico is a photograph by Thomas Pollart which was uploaded on October 20th, 2017.

Digitally & artistically enhanced. Public domain. Seabiscuit and George Woolf, both looking into the camera, lead War Admiral & Jockey Charles Kursinger in the first turn at Pimlico, Baltimore, MD. Considered by many one of the greatest horse racing photos of all time, digitally enhanced, maximum resolution.

On November 1, 1938, Seabiscuit met War Admiral and jockey Charles Kurtsinger in what was dubbed the "Match of the Century." The event was run over 1 3⁄16 miles (1.9 km) at Pimlico Race Course. From the grandstands to the infield, the track was jammed with fans. Trains were run from all over the country to bring fans to the race, and the estimated 40,000 at the track were joined by 40 million listening on the radio. War Admiral was the favorite (1–4 with most bookmakers) and a nearly unanimous selection of the writers and tipsters, excluding a California contingent.

Head-to-head races favor fast starters, and War Admiral's speed from the gate was well known. Seabiscuit, on the other hand, was a pace stalker, skilled at holding with the pack before pulling ahead with late acceleration. From the scheduled walk-up start, few gave him a chance to lead War Admiral into the first turn. Smith knew these things and trained Seabiscuit to run against this type, using a starting bell and a whip to give the horse a Pavlovian burst of speed from the start.

When the bell rang, Seabiscuit broke in front, led by over a length after 20 seconds, and soon crossed over to the rail position. Halfway down the backstretch, War Admiral started to cut into the lead, gradually pulling level with Seabiscuit, then slightly ahead. Following advice he had received from Pollard, Woolf had eased up on Seabiscuit, allowing his horse to see his rival, then asked for more effort. Two hundred yards from the wire, Seabiscuit pulled away again and continued to extend his lead over the closing stretch, finally winning by four lengths despite War Admiral's running his best time for the distance.

There are no comments for Seabiscuit and George Woolf lead War Admiral and Jockey Charles Kursinger in the first turn, Pimlico.   Click here to post the first comment.