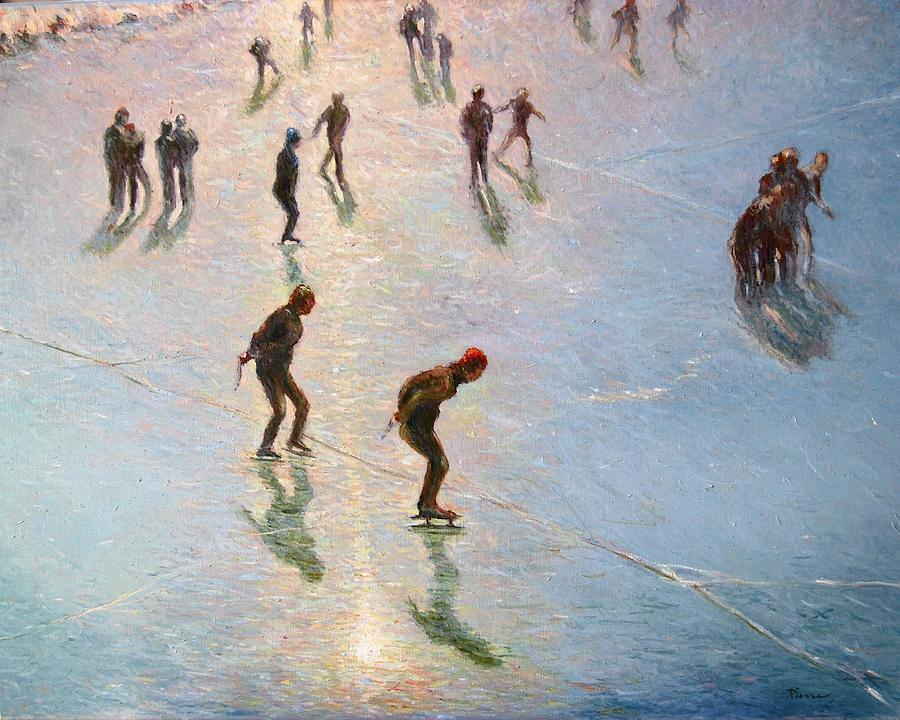 Skating In The Sunset is a painting by Pierre Dijk which was uploaded on August 7th, 2016.

Skating In The Sunset

Skating in the sunset .... more

Skating In The Sunset


Pierre van Dijk was born on 5 June 1950 in �s-Hertogenbosch. At the age of only 4 Pierre wants to draw and paint in all quiet. On his tenth birthday he is given his first �real� set of oil paint, palette and canvas.

In 1954 he and his family move to The Hague. This is where he studies at the Royal Academy for Fine Arts (NL)(1967 � 1972). From 1972 to 1974 he pursues his studies at the Free Academy (NL) guided personally by Livinus van der Bunt, rector of the academy as well as artist. A great number of exhibitions � both in the Netherlands as well as abroad � follow from 1974 onwards.

In 1977 Pierre moves to Gorinchem and becomes a member of �Pictura� in Dordrecht. After a number of modern art projects such as �Les Enfants Terrible� and �Monument Affaire� he returns to his native city �s-Hertogenbosch in 1984.

Pierre then withdraws in himself to contemplate his art, meanwhile developing his painting techniques. Apart from traditional techniques he also masters paintbrush techniques. Due to the increase in quality in his work applications for exhibitions come pouring in.

The authoritative magazine �Kunstbeeld� requests him to exhibit in New York. In 1989 Pierre even moves to the US for a number of months where he exhibits in various galleries; in Gallery 54 in New York among others. In this period he also teaches at Lock Haven University in Pennsylvania.

In the course of the eighties Pierre became more and more internally driven to capture the phenomena of light and colour in all their splendour. Pierre developed a unique palette, style and vision. This vision, the typical use of colours and his handling of light have become famous and trademark Pierre�s impressionist paintings. His vision can be described as vitalist optimism; he paints the beauty of life. His use of colours can be called contradictory. Through the use of a refined combination of a limited number of base colours he achieves an inimitable wealth of colours. His use of light is more than just lighting; it does not fall externally on the object or scene; it is mostly a light from within. Pierre van Dijk colours life and exposes a world of light.

Pierre is represented by several Fine Art Galleries in Switserland, France, Holland and in the USA.

"Colours have a beauty of their own which must be preserved, as one strives to preserve tonal quality in music " - Henri Matisse
"No one is an artist unless he carries his picture in his head before painting it, and is sure of his method and composition " - Claude Monet
� Pierre van Dijk