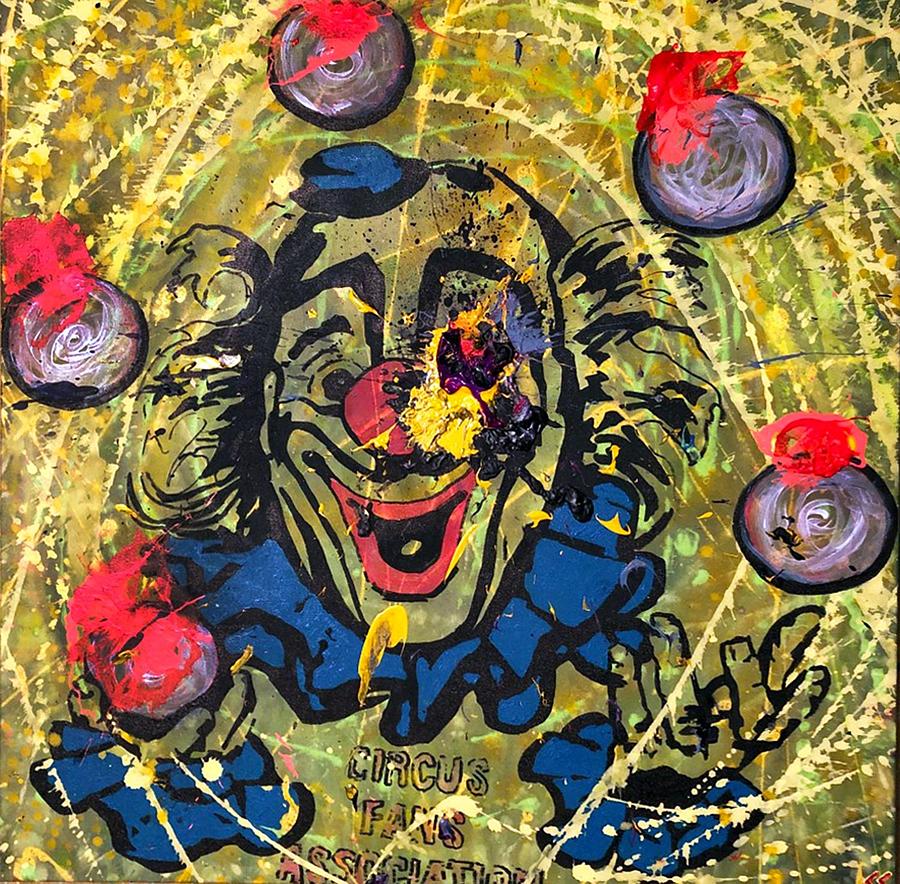 Sledgehammer Face Clown #9 is a painting by Chris Crewe which was uploaded on February 23rd, 2019.

Why the Sledgehammer Face Clown Series?

When I discovered the mark a Sledgehammer can make with paint only a few short months ago I was truly awe inspired by such a violent event on canvas; I paired the newly found brush stroke with the image of a clowns face to give it weight and humor as a finished work. Clowns represented in visual culture are the sad victims of the mark featured in my latest series called “Sledgehammer Face Clowns”.

It’s an interesting story how I got the idea to paint with a Sledgehammer; I bought a sledgehammer out of sheer anger one morning, the previous night I received a hate message scratched on my door after leaving the neighbors yet another dog barking note. I was at the point where I was considering banging the door open and rescuing the animal myself instead of hearing it bark all day while the owners were obviously neglecting the issue.

The Sledgehammer sat in my studio for a couple of days, and I laughed at myself for actually buying the thing, the idea was born out of my worst anger and that’s not usually a reason to make any purchase. I thought “what will I possibly use this for now?” my instinct told me to try picking it up and putting some paint on it... The first mark stands on a canvas of its own signaling the birth of this series, I will remember laughing as I picked up the giant hammer loaded with paint and instinctually said out loud “one, two, better not sue” as I thought about the fate of the wood floor underneath while marveling at my instinctual use of a Simpsons reference. Along the way I have been able to give it a great deal of time and consideration to studying what happens during this violent bang, I am able to control the paint and I have developed techniques to get the shape and direction I need in a mark; I can almost predict what the event will look like before it occurs, this soon became my muse; my obsession.

The mark from the hammer is the final stroke on paintings in my "Sledgehammer Face Clown Series", I do not think much about what the image needs until it all comes together and is ready for the final mark. Instinctually I can tell what the composition requires; it feels like hitting the jackpot when I slam the hammer down and punch a colourfull mark directly into the clown's eye, the finishing touch brings life to the painting and the result is what makes the clown funny.

Learning the Sledgehammer over the last few months has reminded me of Chinese brush painting lessons as a child and how difficult the Horsetail Brush was to use, I spent many hours in frustration practicing to get the perfect mark, using a ground as delicate as rice paper even the slightest bit of excess water could ruin a painting or even cause it to fall apart. With something as delicate as a Horsetail Brush it is necessary to achieve the mark with a delicate hand the first time leaving no room for second chances.

The weight of the hammer striking down creates an explosion of force which causes the paint to race outward and perform unpredictable maneuvers twisting in mid-air and skimming the surface of the canvas like skipping pebbles on a pond. The intensity often causes a hole which I have learned to live with, leaving a hole that pierces through leaves room to apply a paint-soaked patch to the back of the work adding color to the ruptured canvas which dries; highlighting the aftermath of the event in much greater dimension.

I once heard "the hardest thing for an artist to know is when a piece is finished" I always had trouble with this concept because I wanted a sense of victory at the end of a painting, a sense of pride and accomplishment but as an artist I find that often times I am thinking "does it need one more brush stroke?" I see my work for the first time with fresh eyes when I turn to look after hitting it with the hammer, I trust my critical eye and know if I won this round. Sometimes I dance around as if I have won the lottery when I'm finished painting, this is a feeling which has been missing and now my painting process is like any other accomplishment; when finished I feel a sense of pride and ease.

I often wake up the friend who is staying on my couch with a loud bang in the wee hours of the morning; both of us are brought into a state of zen by the completion of a painting. I take off my goggles and get a first look, she rubs her eyes to take a look as well….”cool!” is the usual first word one of us can utter, followed by “really though?” as we both examine the aftermath of color and form left on canvas as I imagine all of the possibilities for the future.