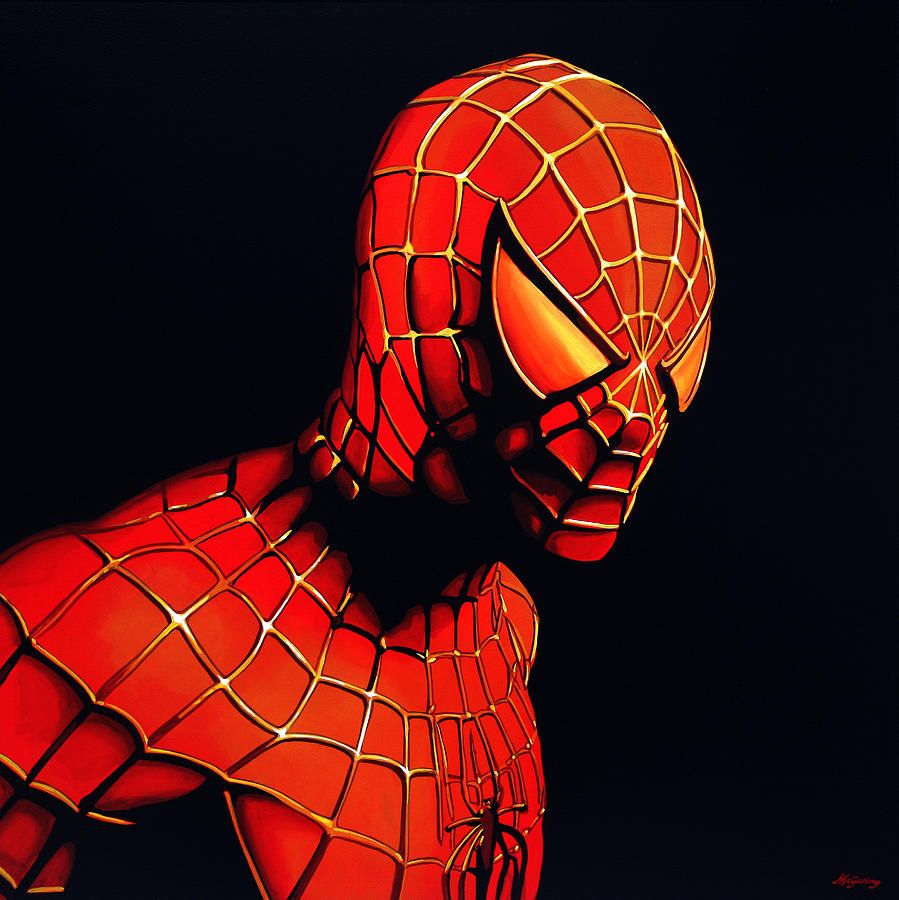 Spiderman is a painting by Paul Meijering which was uploaded on September 12th, 2015.

Spider-Man is a fictional superhero appearing in American comic books published by Marvel Comics existing in its shared universe. The character was created by writer-editor Stan Lee and writer-artist Steve Ditko, and first appeared in the anthology comic book Amazing Fantasy #15 (Aug. 1962) in the Silver Age of Comic Books. Lee and Ditko conceived the character as an orphan being raised by his Aunt May and Uncle Ben, and as a teenager, having to deal with the normal struggles of adolescence in addition to those of a costumed crime-fighter. Spider-Man's creators gave him super strength and agility, the ability to cling to most surfaces, shoot spider-webs using wrist-mounted devices of his own invention, which he calls "web-shooters", and react to danger quickly with his "spider-sense", enabling him to combat his foes.

When Spider-Man first appeared in the early 1960s, teenagers in superhero comic books were usually relegated to the role of sidekick to the protagonist. The Spider-Man series broke ground by featuring Peter Parker, the high school student behind Spider-Man's secret identity and with whose "self-obsessions with rejection, inadequacy, and loneliness" young readers could relate. While Spider-Man had all the makings of a sidekick, unlike previous teen heroes such as Bucky and Robin, Spider-Man had no superhero mentor like Captain America and Batman; he thus had to learn for himself that "with great power there must also come great responsibility"�a line included in a text box in the final panel of the first Spider-Man story but later retroactively attributed to his guardian, the late Uncle Ben.

Congratulations on your feature in Black Background and Color

Wonderful artwork, Congratulations on your sale!

I ruddy love this piece of art, bruv! Please check out my page on this website, I did a Green Goblin drawing which you might enjoy! Once again, I love this painting of yours!

Thank you so much, Robyn, for all your support, your compliment and the feature in your amazing group!!;-))

has been featured on The Art Shoppe Cafe group homepage! Thank you for sharing your beautiful work with us! F/L 12.15.15

You are very talented. awesome work.

Thank you so much, Valenteana, for your kind words and compliment!!:-))