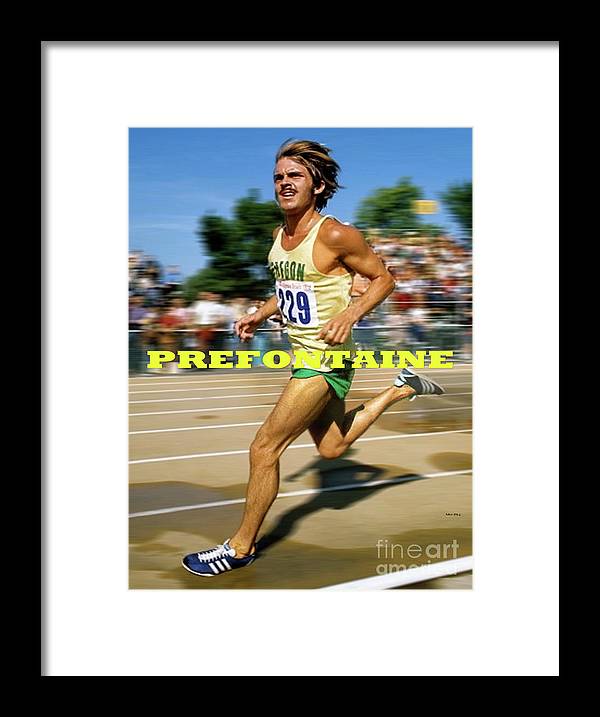 Steve Prefontaine, The Legend, Oregon Ducks framed print by Thomas Pollart.   Bring your print to life with hundreds of different frame and mat combinations. Our framed prints are assembled, packaged, and shipped by our expert framing staff and delivered "ready to hang" with pre-attached hanging wire, mounting hooks, and nails.

Norman, OK, thank you for your purchase today !!

MIddletown, DE, best of luck with your T-shirt purchase !!

Malvern, PA, thank you for your purchase !!!

Asbury, IA, thank you for your purchase today, best of luck !!

N Potomac, MD, great T-shirt, thank you for your purchase today, the legend is so inspiring !!!

Holmes,PA, love the T-shirts, success with your running competitions !!!!

Fenton, MO, love the onesie shirt, a legend in the making !!!

Eugene, OR, thank you for your purchase today !!!

Mohawk, NY, thank you for your purchase !

Bend, OR, thank you for your purchase !

Beaconsfield, thank you for your purchase today !!

Thank you for your T-Shirt purchase, Savannah, GA, looks cool, hope it inspires you to epic achievements !

Thanks for your purchase Jacksonville Beach, FL !

Thank you for your purchase, Houston, TX !

Thank you for your purchase, Murrarrie, QLD !

to give anything less than your best is to sacrifice the gift.' - Steve Prefontaine. Art purchase Mokena, IL, thanks, hope it inspires you to greatness !

Very unhappy. The resolution is horrible. You shouldn't be selling this...

i love my picture

The frame arrived detached from the acrylic, as the fasteners had not been secured. I had to rip off the backing to fix it. The company only compensated me 30% of the shipping cost, which I do not deem fair. While I have been satisfied with the prints received, I will no longer go through this company for framing.

Original art, mixed media, features the very cool, moving free & easy, Steve Roland ' Pre ' Prefontaine, Olympian & Legend ( January 25, 1951 – May 30, 1975 ) An American middle and long-distance runner who competed in the 1972 Olympics. Prefontaine once held the American record in seven different distance track events from the 2,000 meters to the 10,000 meters. Prefontaine died in May 1975 at the age of 24 in an automobile accident in Eugene, Oregon . The career of Steve Prefontaine, alongside Jim Ryun, Frank Shorter, Dave Wottle and Bill Rodgers generated considerable media coverage, which helped inspire the 1970s "running boom". Prefontaine was often known for his mustache and his long locks of hair that parted as he ran.

Thank you for visiting my art site. .. CLICK on the COLLECTONS icon below to view art works by topic. I think PICTURE RAG is the BEST PAPER choice, holds vivid & true colors, exceptional black & white imagery, acid-free paper from 100% cotton rag. I am a University of Missouri, Columbia graduate, I have been drawing, tracing, painting and creating Photo Realistic Art with inks, watercolors, acrylics, oils and recently digital drawing media for several years. I hope my art enhances your life with as much enjoyment & pleasure as I had in creating them ! My profile also includes various representations of vintage Fine Art that have been digitally & artistically enhanced as reproductions for print. See this site for paper descriptions ....

All framed prints ship from our production facility within 2 - 3 business days of your order.