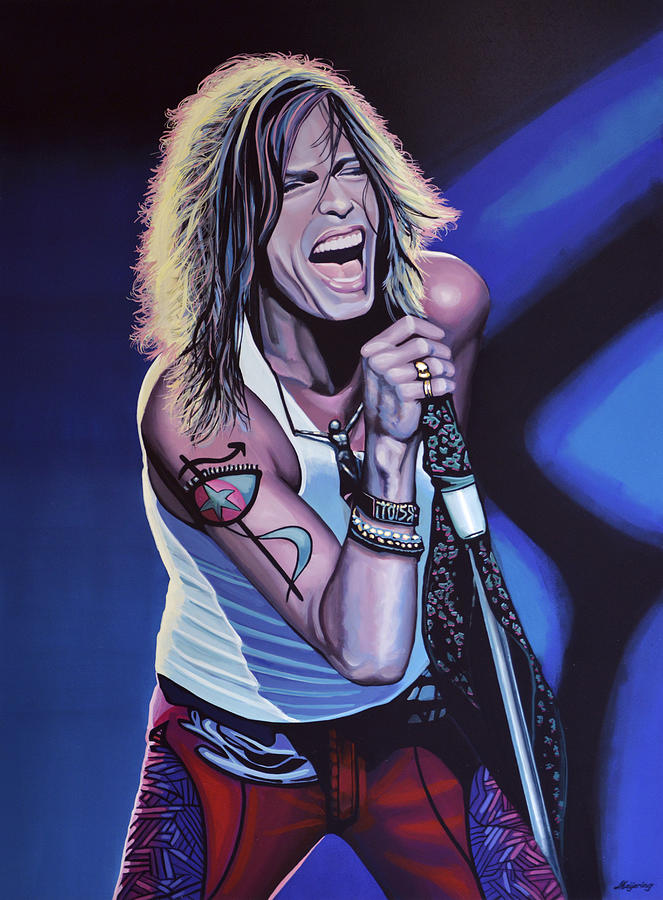 Steven Tyler 3 is a painting by Paul Meijering which was uploaded on May 8th, 2013.

Realistic acrylic painting of Steven Tyler of Aerosmith, painted by the Dutch fine artist Paul Meijering - the Original painting is 120 x 90 cm and for sale

Steven Tyler (born Steven Victor Tallarico; March 26, 1948) is an American singer-songwriter, multi-instrumentalist, and former television music competition judge, best known as the lead singer of the Boston-based rock band Aerosmith, in which he also plays the harmonica, and occasional piano and percussion. He is known as the "Demon of Screamin'" due to his high screams and his wide vocal range. He is also known for his on-stage acrobatics. During his high-energy performances, Tyler usually dresses in bright, colorful outfits with his trademark scarves hanging from his microphone stand.

In the 1970s, Tyler rose to prominence as the lead singer of Aerosmith, which released such milestone hard rock albums as Toys in the Attic and Rocks, along with a string of hit singles, including "Dream On", "Sweet Emotion" and "Walk This Way". In the late 1970s and early 1980s, Tyler had a heavy drug and alcohol addiction and the band's popularity waned. Tyler and bandmate Joe Perry became known as the "Toxic Twins" due to their drug abuse. In 1986, Tyler completed drug rehabilitation and Aerosmith rose to prominence again when Tyler and Perry joined Run-D.M.C. for a re-make of the classic Aerosmith song "Walk This Way", which became a Top 5 hit. Aerosmith subsequently launched a remarkable comeback with the multi-platinum albums Permanent Vacation, Pump, Get a Grip and Nine Lives, which produced a combined thirteen Top 40 singles and won the band numerous awards. During this time, the band embarked on their longest and most extensive concert tours, promoted their singles with conceptual music videos and made notable appearances in television, film and video games.

In the wake of this success, Tyler emerged as one of the most enduring rock icons. Since the late 1980s, he has embarked on several solo endeavors including guest appearances on other artists' music (working with artists as diverse as Alice Cooper, Santana, Pink and Keith Anderson), film and TV roles (including as a judge on American Idol and several cameo and guest appearances in other programs and films), authoring a bestselling book and solo work (including the Top 40 hit single "(It) Feels So Good" in 2011). While tension with his Aerosmith bandmates boiled in 2009 and 2010 after he fell off the stage at a concert, had a relapse with prescription drugs (which he successfully received treatment for in 2009), and signed on to American Idol without telling his bandmates, Tyler has continued to record music and perform with Aerosmith, after more than 46 years in the band. In May 2015, Tyler released the country single "Love Is Your Name", followed by the second single "Red, White & You" in January 2016; his debut solo album, We're All Somebody from Somewhere, was released on July 15, 2016.

Tyler is included among Rolling Stone's 100 Greatest Singers. He was ranked third on Hit Parader's Top 100 Metal Vocalists of All Time. In 2001, he was inducted into the Rock and Roll Hall of Fame with Aerosmith and in 2013, Tyler and his songwriting partner Joe Perry received the ASCAP Founders Award and were inducted into the Songwriters Hall of Fame.

One of your peers nominated this image in the 1000 views Groups nominated images by your fellow artist in the Special Features #15 promotion discussion. Please visit and pass on the love to another artist.....L/F/Tw

Congratulations on your sale Paul! Awesome painting of Steven Tyler!

Thank you so very much, Kathy, for your congrats and compliment!!;-))

Wonderful rendition of a fantastic artist and character.

Thank you so much, John, for the feature and your compliments!!;-))