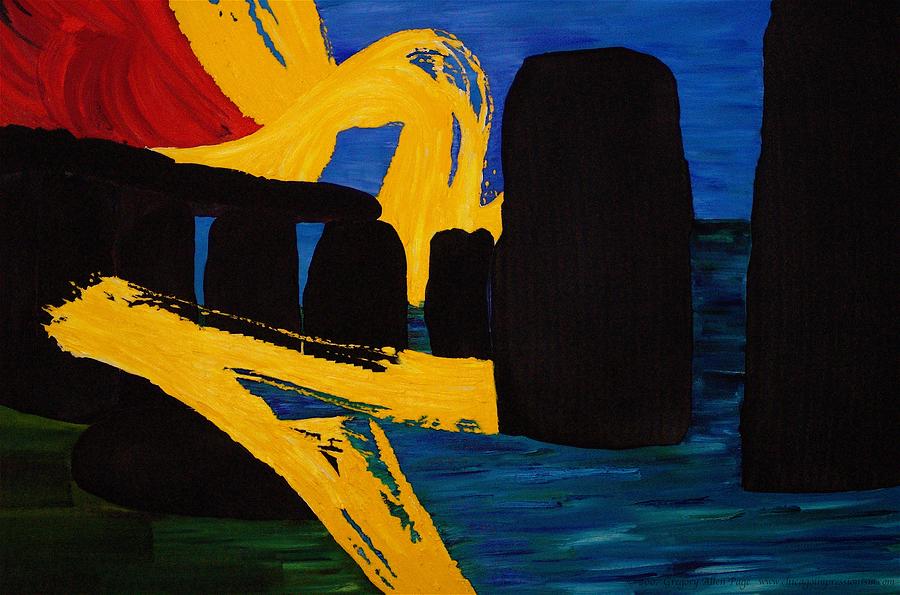 Stonehenge Abstract Evolution1 is a painting by Gregory Allen Page which was uploaded on November 12th, 2007.

I tried to do a simple painting, something easy to look at without a cryptic message or meaning. It was not as pure abstract as i had intended..the... more

I tried to do a simple painting, something easy to look at without a cryptic message or meaning. It was not as pure abstract as i had intended..the whole Stonehenge thing was really influential in the visual result. It is just hard for me to make a simple painting..whatever.The painting was finished a couple months ago and is almost dry. The yellow "paint brush mark" is very thick pigment, with no oil, or medium of any kind added. The blue represents the sky, the blue-green represents the ocean, the green represents land, and the red represents the sun or fire..the yellow represents the artist interacting with these elements. I have deep thoughts while painting, and my thoughts and viewpoint of the universe are expressed in each painting. My work is not a strict aesthetic vibration, but a view into my understanding of the universe influenced by the beauty of Oil on Canvas as a medium.Stonehenge is a prehistoric monument located in the English county of Wiltshire.The megalithic ruin known as Stonehenge stands on the open downland of Salisbury Plain two miles (three kilometres) west of the town of Amesbury. Stonehenge
is surely Britain's greatest national icon, symbolizing mystery, power and endurance. Its original purpose is unclear to us, but some have speculated that it was a temple made for the worship of ancient earth deities. It has been called an astronomical observatory for marking significant events on the prehistoric calendar. Others claim that it was a sacred site for the burial of high-ranking citizens from the societies of long ago. The question of who built Stonehenge is largely unanswered, even today. The monument's construction has been attributed to many ancient peoples throughout the years, but the most captivating and enduring attribution has been to the Druids. This erroneous connection was first made around 3 centuries ago by the antiquary, John Aubrey. Julius Caesar and other Roman writers told of a Celtic priesthood who flourished around the time of their first conquest (55 BC).

I Love the deep colours and the strong brush stroke, brilliant work.

Thanks for the comment. The painting original is part of my personal collection. would you like to make an offer?

What a contemporary take on an ancient place. I really enjoy the dynamic relationships of color, space and line in this very enjoyable painting.