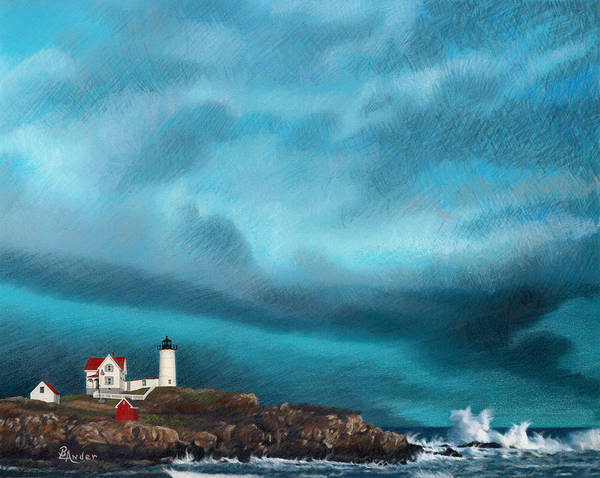 Stormy Sentinel poster by Brent Ander.   Our posters are produced on acid-free papers using archival inks to guarantee that they last a lifetime without fading or loss of color. All posters include a 1" white border around the image to allow for future framing and matting, if desired.

Nubble Lighthouse, Cape Neddick, York Maine. The Nubble is a small, rocky island a short distance off the eastern point of Cape Neddick, north of the... more

Wow! Gorgeous colored pencil drawing. I love the detail you drew into this picture....especailly the layers of colors in the clouds and the action of the surf. Fantastic work of art. Thanks for sharing.

I received these prints today and cannot wait to have them matted and framed. They are beautiful!!

Beautiful!! I love it. Brings life to our master bedroom. I bought 2 more prints to compliment the hummingbird!! Such amazing colors. A great value!!

Love the print but unfortunately the bottom was ripped. 😞

***** Great photo. We have yet to hang it but love it because we live in the area where it was taken.

Nubble Lighthouse, Cape Neddick, York Maine. The "Nubble" is a small, rocky island a short distance off the eastern point of Cape Neddick, north of the entrance to the York River and York Harbor. In 1602, explorer Bartholomew Gosnold met with local Indians on the island and dubbed it "Savage Rock." The 41-foot cast-iron tower, lined with brick, was first illuminated on July 1, 1879. At first, the lighthouse was painted reddish-brown, showing a fixed red light through a fourth order Fresnel lens. The lighthouse still exhibits a red light, but the tower has been painted white since 1902.

Creation turns me on. From a blank surface to the finished work of art, it's the process that feeds my soul. To me, art is a lifestyle, a compulsion and a passion. With a formal education in the arts spanning over eight years and an apprenticeship lasting two, I found myself addicted to the learning process. Now after more than forty years of practice, I still consider myself a perpetual student of art. In my opinion, to stop learning would be tantamount to artistic stagnancy. . . so, the exploration continues. My WEB Sites : Ander Expressions Fine Art & Ander Photography. My Social Networks : FaceBook.